I did everything I could to prepare my son for his little sister’s arrival this past August.  I read plenty of articles, committing to memory any tips for helping the transition.  John and I read book after book about new babies and what to expect when they come home.  Andrew and I bought John a stuffed tiger as a first “gift” from his little sister.  When he came to visit us at the hospital, I made sure that I was free to hold him as soon as he arrived.  Andrew and I talked extensively about carving out one-on-one time with John.  I was terrified that he would not adjust to his new role as a big brother, so I wanted to do everything in my power to help him.

As it turns out, most of my attempts failed miserably.  John immediately tossed aside his new tiger in favor of the stuffed penguin that he’d gotten from the hospital gift shop with my mom (and the idea that the tiger came from his sister was totally lost on him).  When he came into my hospital room, Andrew and I were invisible to him, such was his adoration of and fascination with Felicity.  He was obsessed with her from the beginning.  Though he was initially afraid to hold her, or even touch her really, he constantly wanted to be near her.  When she napped in the living room, he was never far from her sleeper.  Now, when she’s around, all he wants to do is lie next to her, hold her, make her laugh.  He has loved her from the moment he laid eyes on her. 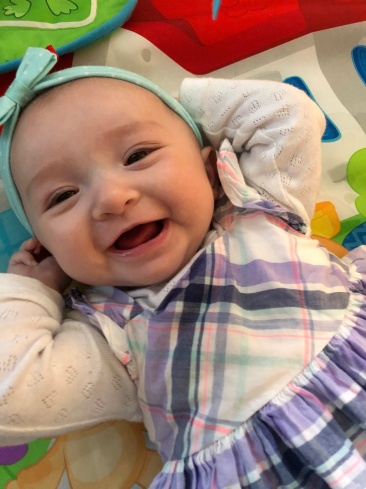 Miraculously, we have not experienced much jealousy.  John continued to sleep well, as he always had, and after attempting to climb out of his crib once during nap time, he had no problem switching rooms with Felicity.  He began sleeping in the twin bed in what had previously been the guest room (it is now undeniably John’s room), and Felicity easily adjusted to sleeping in the nursery, first in her Rock N Play and then in her crib.  Bottle-feeding hasn’t been as challenging as I thought it might be either, probably because John knows that after Felicity finishes her bottle, he’ll get 20 minutes of cuddling and TV while we wait for Felicity to digest some of her bottle (one of our solutions to her acid reflux issues).  While the stuffed tiger might not have worked its promised magic, there was one suggestion that really did work for us: one-on-one time.

John calls it his “Mama- John Time.”  Every morning and afternoon, while Felicity naps, we have Mama-John Time.  We start with some time spent reading or working on his letters and numbers, and then he gets to pick games and toys to use for the rest of her nap time.  It normally amounts to about two hours of one-on-one time on a daily basis, and these chunks of time are the highlight of his day.  As soon as I begin nap time routine with Felicity, John will start cleaning up his toys and chatting about his upcoming Mama-John Time before joining us to give his little sister a kiss before she goes to sleep.

John absolutely adores Felicity.  It’s clear as day to everyone just how much he loves her.  When Felicity cries, he is immediately in her face, telling her that it’s going to be okay.  He is always willing to find her pacifier, and pull out toys from her bin so that she can play.  When she sits on the couch with us, he is constantly wrapping his arms around her and giving her hugs and kisses.  He loves making her smile, and the first time he made her laugh will always be one of my favorite memories of this time period.  He loves spending time with Felicity, but he loves his Mama-John time too.

As Felicity gets older, I’ll have to be more conscious about the amount of time I spend with her.  I used to have quiet time with her every evening after John went to bed, but now they both go to sleep at the same time.  I’ll have to work harder as she gets older, but for now I’m just enjoying those peaceful hours of coloring, painting, and playing with dinosaurs.  I’m going to try to enjoy it as much as John does, if that’s possible.  He’s had to deal with a lot of change over the past few months, and I think Mama-John Time is exactly what he needs to remember how much he means to me, how much I love him, and how he’ll always be my little man.