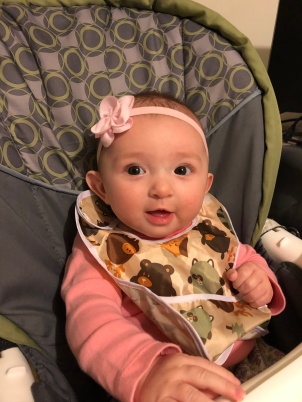 Getting John to eat regular food was a challenge that I knew I never wanted to repeat.  We introduced him to pureed foods at four months, and he quickly developed an aversion to anything remotely resembling actual food.  When he turned one, he was still eating two baby food meals per day, and I distinctly remember him eating jars of baby oatmeal at eighteen months, when we went on vacation with our families.  I assume that at some point soon after that, we completely phased out baby foods, but I can’t be sure.  I just know that he was well past two before we could easily sit down to dinner and know that John would consume most of it without issue.  With all the difficulty that we had weaning John, we knew that we wanted to do something different with Felicity.

When John was starting solids, I had already heard about baby-led weaning (BLW) from friends, but after feeling the pressure to start solids at four months, we never made the jump to BLW.  We were also dealing with a lot of sleep issues, so investing more time and energy into learning a whole new way of introducing foods just seemed too overwhelming at the time.  When I was pregnant with Felicity, I read two books to prepare myself for Baby #2: Precious Little Sleep by Alexis Dubief and Baby-Led Weaning: The Essential Guide to Introducing Solid Foods by Gill Rapley and Tracey Murkett.  I would highly recommend both of them, without hesitation.

When Felicity was born, I intended to wait until 6 months before introducing solids, and going straight to BLW.  At Felicity’s 4 month well visit, we changed our plans as per our pediatrician’s suggestion.  I started offering traditional purees once a day for extra calories since Felicity continued to spit up a great deal of formula.  Our pediatrician also mentioned recent literature advising that earlier introduction to solids decreased the chances of allergies, but even she said that she wouldn’t be surprised if ten years from now, the literature would change.  And so I bought a few containers of purees, and we patiently waited for Felicity to meet all of the requirements to begin BLW: (1) to be at least six months olds, (2) to be able to sit up unsupported for one minute, (3) to have lost the tongue-thrust reflex, (4) to show an interest in food, (5) to be able to pick up foods and bring them to her mouth (not referring to pincer grip).

On the morning that Felicity turned six months old, she finally met the final two requirements: she was six months old, and after weeks of practice, she had mastered sitting up unassisted.  We continued to practice through the remainder of the day, intending to have Felicity’s first meal be dinner with the family.  She ate pizza (cheeseless, since she’s still allergic to milk protein) and apple slices, and it was the highlight of her day.  Since starting just a month ago, she has eaten waffles, rolls, pizza, apples, pears, grapes, carrots, broccoli, breadsticks, toast with both nutella and peanut butter (on two separate occasions), chicken nuggets, hamburger meat, sweet potato fries, and french fries.  As she grows, we’re excited to try even more new foods.

Starting BLW was both exciting and scary.  It was amazing to watch Felicity feed herself, and to watch her face light up whenever she successfully got anything into her mouth.  It’s hard to say how much she eats exactly, but it’s clear that she’s enjoying the whole experience immensely, even if she spends most of her time sucking the juices out of food.  And her recent diapers definitely indicate that she has successfully ingested at least some of her food. 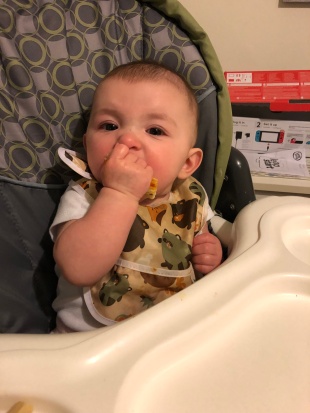 Watching her gag the first time was definitely frightening, but it was also amazing to see how she handled the situation.  Even though it felt like forever, it only lasted a few seconds, and when she was done, she was already looking for the next piece of food to eat.  Even after just a month, she gags significantly less, and when she does, she just seems annoyed that it prevents her from eating temporarily.  She has really taken to this new adventure, and I’ve been left amazed so many times.

Felicity ate hamburger meat on her second night doing BLW.  She sat there with the biggest smile on her face as she sucked the life out of her strip of meat.  John didn’t eat meat until he was nearly a year old, and he still mostly hates it.  I can’t help but laugh when it comes time to plate our meals, because Felicity will get whole strips of meat, while John will get one bite-sized piece, which is the most that he will eat.

I love the fact that Felicity will eat just about anything we give her.  So far, the only food that she has showed any distress over has been pear, and I suspect it was because the slices had been cooked to an odd consistency (we haven’t had any issue with them since).  I don’t have to prepare anything separate for her, and the only difference between our plates and hers is presentation.  Since she is lacking a pincer grip at the moment, her food needs to be cut into strips so that she can hold them comfortably.  I am thrilled not to have to mix baby cereal with formula, or puree fruits and veggies, or spend extra money on baby foods in stores.  Instead, I just carve out a bit for Felicity from my portion, and everyone is happy.

I save time in meal preparation, and also at the table itself.  Before Felicity started BLW, I had to scarf my meal down so that I could spoon-feed Felicity as I continued to negotiate bites with John.  Now I can eat my meal at a more leisurely pace, with one eye on Felicity, and the other on John.  Even though it takes longer for Felicity to feed herself, she’s eating with the rest of the family, and honestly, most days she finishes before John does anyway.

Obviously, BLW has a lot of advantages, but it does have its disadvantages- primarily, the mess.  BLW is definitely messier at this stage than spoon-feeding was.  In the two months that we spoon-fed Felicity, she barely lost a drop, she sucked the food down so quickly.  Now, juices are constantly pouring down her neck and her hands, which are always a mess, are naturally everywhere by the time our meal is over.  Fortunately, we’ve found that a smock-style bib and a removable tray on her highchair take care of a lot of the mess.  If you know me at all, you know that I hate mess.

So far, people have only been impressed with Felicity’s eating habits.  When we went out for dinner with our families, a woman expressed her amazement at seeing Felicity gnawing on a stalk of broccoli at the table.  Our parents have watched in awe as Felicity has consumed entire French fries, strips of toast, and apple slices.  I know that many people are discouraged in their BLW journey because of the negative comments of other people, but so far, we have not had to endure any such remarks.  I don’t imagine we’ll be dining out much in the next few months, so I think by the next time we eat in a restaurant, no one will be surprised to see an older infant eating table food, though they might be surprised to see what she is eating.

I know that BLW is not for everyone, but after enduring the stress and frustration of traditionally weaning one child, I was ready for something new.  Baby-led weaning was exactly what I needed.  It has all of the convenience that the mother of two needs, and I’ve really enjoyed watching Felicity sample new foods.  I hope to encourage a deep and healthy love of food in both my children, but I suspect that because of my decision to use BLW with my youngest, she will have the easier time of it.  Fortunately, even my picky little man has become more adventurous in his eating habits, and hopefully seeing his little sister eat with such abandon will encourage him as well!