I should probably begin by stating that this is not a post dedicated to arguing about whether or not cry rooms should exist.  Personally, I would say that I fall more on the affirmative side of that argument, but defending my position or arguing against another stance is not my intention here.  Regardless of how we might feel, the fact is that they exist, and for better or worse, they are regularly used by all types of people.

Andrew and I have found ourselves sitting in the cry room on more than one occasion over the past year.  Our policy has always been that if John becomes too difficult to manage in the main body of the church, we will move into the cry room until we get his behavior under control, calm him down, or get him to fall asleep.  We have used the cry room for all of these reasons at one time or another, when John didn’t want to be held anymore, escalated from whimpering to full-blown screaming, or wanted to take a nap.  In each case, we (or I) would bring John into the cry room, where we would allow him to crawl around for a while, would bounce him until he calmed down, or rock him until he fell asleep.  After he was settled, we would return to the main body of the church.

I’ve stumbled across all sorts of people while in the cry room.  I’ve encountered other parents with infants,  recognizable by the tired eyes, drooped shoulders, and of course the baby in their arms.  I’ve found parents with children of a range of ages- toddlers who must have their hands in everything, school-aged kids who refuse to stop talking, preteens and teens who spend the entire time on their phones or hand-held gaming system.  I’ve also encountered several adults who use the cry room for more “creative” purposes: carrying on a conversation during a particularly boring homily or else hiding from the rest of the congregation while fighting a cold.  While I don’t really think that these adults are using the cry room appropriately- it’s not a place to carry on a conversation without the inconvenience of a preaching priest or to hide while fighting a cold (I understand if you don’t want to spread your germs, but honestly, I think most adults are more capable of withstanding them than the newborns that you sit next to in the cry room), I have never told them to leave.  But I have definitely wanted to, at one time or another.

Cry rooms have definitely been a place of refuge for us on occasion.  In the first few months, when John would cry and the only way to soothe him was to pace and bounce him, the cry room gave me space away from the eyes of other parishioners.  Knowing that John’s behavior was not causing a distraction gave me a great sense of relief, and I was grateful for a room where I could shush and pace and bounce without distracting.  When John became old enough to crawl and then to walk, the cry room gave him a place to stretch his legs for a few minutes when he grew listless.  Sometimes just five minutes in the cry room was enough to get through the rest of Mass without issue.  And yet, as much as the cry room has been a place of refuge, in some ways it was also a bit of a nightmare for a parent of a young child.

For the first few weeks that Andrew and I attended Mass at a new parish with a cry room, we were always approached by either the ushers or some older women of the parish, who would very proudly show us where the cry room was.  I’m sure that in many cases they were just looking to help, to offer some information that might be important in the future- and yes, it was very helpful to know where the cry room was when we needed it.  But there were other times where their lingering eyes as we thanked them and walked into the main body of the church made me think that we were entering a place where children did not belong.  Sometimes, the underlying message seemed to be that if a parish has a cry room, parents should feel obliged to use it at all times. 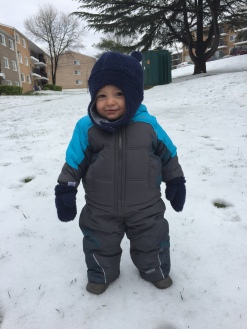 Now I’m sorry, but that’s just not true.  Just because a parish has a cry room does not mean that I am required to use it at all times.  I’m sorry if my baby’s babbling is distracting you, but he’s being quite quiet, and as a baptized member of the Body of Christ, he has every right to be here.  Yes, if my son begins to act up, if he becomes too fidgety or too loud, I will go to the cry room.  If my son begins to really cry, I will go.  But not before.  As much as it might be a refuge in times of desperation, a parish’s cry room often resembles something of a prison.  It is enclosed, separating us from the rest of the church except for a usually fuzzy sound system and a large window for us to watch the Mass and for you to watch us.  As bright and comfy as a cry room might be, I don’t think it’ll ever cease to feel a tad like a prison.

I’ve also known cry rooms that have been transformed into cry and nursing rooms, where mothers are expected to bring their children to breastfeed them.  If a mother wants this extra bit of privacy, she is more than welcome to it, but she should never be made to feel as if she has to nurse there.  Women are perfectly capable of nursing modestly in the pews, so there’s no reason to ostracize them as they feed their babies.

Most weeks, these are not the reasons that I hate using the cry room so much.  Sure, I don’t like the prison-like feeling.  I don’t like the feeling of ostracizing that often accompanies cry rooms.  But more often than not, it’s the other people using the cry room that really cause me to resent my time there.  There have been countless times where I have walked into the cry room to find one or two entire families occupying the majority of the pews.  Sometimes the children, who are almost always school-aged, will be talking among themselves.  Other times they will all be playing some sort of game or texting on their phones.  On occasion they will have their toys littered all over the cry room floor.  It would be one thing if I found myself distracted by the fussy infant or the toddler throwing a tantrum.  I would not blame those parents; they are dealing with babies, and they are not the most rational of creatures.  But most of the time, it’s not the babies that are distracting- it’s the laughing teens, the kids on their phones, the toys scattered over the kneelers.

Cry rooms were never intended for families to drop off their distant or antagonistic teens.  They were not meant to be a place for children (or adults) to carry on conversations away from the prying eyes of the priest and other parishioners.  They were not meant to be a place for kids to play on their phones and other handheld game systems, with or without their parents present.  The cry room was never meant for any of these things.  They were not meant to serve as excuses for children to misbehave.  Children will not learn how to behave in Mass if we do not teach them, help them, show them, and leaving them in the cry room to talk or play games will not do any of those things.

Sure, the cry room will be a loud place from time to time.  There will be wailing babies, tantrum-throwing toddlers, and argumentative children.  Some days, we will spend the hour pacing because that’s the only thing that soothes our fussy infant.  On those days, we might be able to listen to most of the Mass as we walk.  Other days though, we will spend the entire length of the homily trying to convince our toddler that they cannot tear out every page of the missalette.  On those days, we might not hear a single word.  But that does not mean that God doesn’t want us- or our children- there.  Going to Mass might feel like the stuff of  nightmares some days, but the cry room is meant to be a refuge.  Let’s make sure that it stays that way.

Dear faithful readers, As you might imagine, the life of a full-time wife, full-time mother, full-time DRE/youth minister, and part-time writer can be extremely hectic at times.  In order to increase the amount of time dedicated to my full-time “professions,” … END_OF_DOCUMENT_TOKEN_TO_BE_REPLACED

My husband and I have lived in the same apartment for the past two years.  It was the first apartment I had ever rented, and the first that Andrew and I shared as husband and wife.  Our firstborn son spent … END_OF_DOCUMENT_TOKEN_TO_BE_REPLACED