I have never been known to back down from a controversial topic.  In the past few years, I have written posts about contraception, gay marriage, fur moms, and Islam.  I have been called a bigot and a monster; I have been told that I don’t deserve to be a mother and that my son needs to be gay as God’s eternal retribution for my horrendous viewpoints.  I have been unfriended and blocked, and yet, as far as I can tell, I tend to be a lot gentler than some of my more fiery counterparts.  But despite the occasional negative feedback (most of my readers are actually very supportive), I have not stopped writing.

And yet there is one topic that to this day, I have never addressed: racism and the Black Lives Matter movement.  I have remained silent up until this point, and to be honest, if it hadn’t been for an incident this past week, I probably wouldn’t have changed that.  It’s just a can of worms that I have never felt prepared to open.  I have my opinion, just like everyone else does, but it’s not as well-formed as I would like it to be before I write anything on the matter.  I like being confident in my argument before posting it for the world to see, and the Black Lives Matter movement is just not something that I have ever felt prepared to write about.

This is what I can say for sure: racism is wrong.  We should not pass judgments concerning an entire group of people based off the actions of a sub-sect of that group.  We should not assume that something that is true of some people is true of all.  Blanket statements are always dangerous.  They lead us to make assumptions that can be harmful.  I can say without a shadow of a doubt that racism is wrong.

But I can also say that it is easy.  It’s easy to pass those judgments, to make those assumptions.  It’s easy to be racist, at least in the more subtle ways.  But just because it’s easy doesn’t make it right.

Racism is also learned.  We teach our children to be racist through our words and actions.  We don’t even need to open our mouths to convey our latent racist sentiments.  The way that we simply look at another person can say so much.  We barely give our kids a chance to rise above the judgments and assumptions that we cling to so naturally.  Before they can even form full sentences, our children already realize that we are not all the same, and if you think that some people are better than others, there’s a good chance that your kids will too.

And finally, racism is not one-sided.  Racism is all over the news, but we never consider the possibility that racism might extend beyond whites’ feelings towards blacks.  We never consider the flip side, that African American men and women are not immune to racist thoughts, that they are fully capable of making assumptions about white men and women, as well as about themselves.  And that brings me back to the incident from this past week.

I take a walk with John every morning while he naps in his stroller.  During our travels, we inevitably pass other walkers, some on their way to school or work, others running errands on foot, and still others walking for exercise.  Over the past year, I have gotten used to people’s responses when they see me.  Most smile or wish me a good morning, some just stare at me like they’ve never seen the likes of me before, and then there are the few who give me the most withering look possible.  They stare me down, glaring at me as I approach with my stroller and then following me as I continue on my way.  I’ve never done anything to these people, and they already hate me.  And it doesn’t take a genius to know why.  They hate me for the color of my skin. 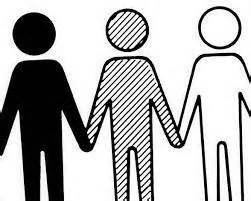 I have gotten used to these glares, though they still hurt.  While most of our neighbors are kind and welcoming, these select few do a wonderful job of making me feel unwanted and not welcomed in this primarily-black community.  I am not wanted because I am white.  I am not welcomed because there is an unspoken assumption among many people that all white people are racist with a major superiority complex.  I have never done anything to suggest such a thing, but it is assumed- merely because of the color of my skin.

But this past week, the judgments and assumptions reached a whole new level.  I was taking my morning walk, and John was already asleep in his stroller.  Just ahead of me, there was a group of boys gathered on the sidewalk.  Needless to say, they were all African American children.  I dreaded walking past these children, not because they are black, but simply because they’re often rude.  They generally won’t move to the side for me, choosing instead to physically block our path and forcing me to push my stroller over the grass, or worse, in the street.  It’s annoying, but I’ve accepted it as a regular part of our morning walk.

As I approached the group, I recognized some of the kids from the pool this past summer.  John and I had spent time at the pool nearly every day that we were able to, and there’s no better conversation starter than a baby.  As we passed them, I caught some movement in the corner of my eye, and I turned with just enough time to see a boy rising from what had clearly been a very deep bow.  I was stunned.

I didn’t even have time to process what I had just witnessed before I spoke, asking the boy why he had done that.  I was even more stunned, and a bit disturbed, by his response: “Because you’re white.”  At this point, the boys that I knew from the pool were frowning at the boy who had bowed, clearly uncomfortable with the situation.  The rest of the group, on the other hand, were keen on egging the boy on.  They were laughing, and waiting to see what I would do.

At this point, several things were apparent.  The boy had bowed because he thought it would be funny, but also because he assumed that I thought that I was better than him because of my skin color.  The boy assumed that I was racist.  It also seemed likely that the boy had learned this behavior from somebody.  All of these pieces of information clicked into place as I answered him with the first thought that came into mind, “Why does that matter?”

The boy was silent, as were his classmates.  Had I had more time to prepare, I might have said more, but as you can imagine, the exchange had taken me completely by surprise.  The boy was now speechless, and I could think of nothing else to say, so I started pushing John’s stroller again, continuing our walk as I replayed our conversation in my head.

Really, I don’t think there was much more that I needed to say.  My point was made, and I think his silence suggests that he got it.  I never gave him any reason to believe that I thought that I was better than him.  I had never done anything to suggest that I was racist.  I never gave him any reason to suspect that I intended to give him anything other than a friendly smile.  But instead of smiling at us, he bowed.   He passed a judgment based on nothing but the color of my skin, and as a result, he made a fool of himself.

As I continued about my day, the interaction stuck with me, and I kept finding myself thinking about it.  I had never experienced such blatant racism before.  I had gotten dirty looks and unwelcoming glances, but no one had ever bowed to me before.  No one had ever made such a pompous gesture in front of me just because of the color of my skin.  It was an uncomfortable feeling, made even worse by the fact that the culprit had been a child.  It had been a little boy, no more than eight or nine, and he already had it in his head that all white people thought that they were better.  At eight or nine years old, he already had such a dreary view of the world.

But there was also a part of me that wondered where he had learned to think this way.  After a year here, I knew that there aren’t that many opportunities to interact with white people.  I can count on my ten fingers the amount of white people living in our apartment complex, and I know half of them personally.  I can’t know for sure, but I suspect that his prejudices were formed through secondhand tales, and quite possibly, assumptions by adults that have little to no support.  It is devastating to know that anyone has experienced racism, and what I experienced that morning is nothing compared to what some of my African American friends have experienced, but it is also devastating to know that these prejudices are being passed down from parent to child as a matter of principle.  As if there’s no possibility of changing, of a better life, of a brighter future.  Our children deserve better than that. 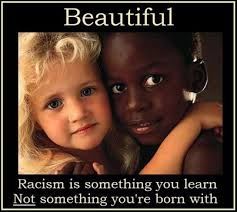 Racism is something that must be learned.  Children are inherently inclusive.  They see color, but they are not bothered by it.  It was obvious whenever we went to the pool.  Whenever I talked to another person, it was not because they approached me, but because their son or daughter approached John.  They knew that he was a little white boy, but they didn’t care.  They just saw a potential playmate, even if it was one who would try to eat all your toys.  But one day, that same little boy might bow to John, and he will see John not as a friend, but as an enemy.  John will never be taught that, but there might come a day when his friend from down the street will be told that he can’t play with John anymore because they are not the same color.  Or else that little black boy will hear his mother or father talking about white people, and he will reach the conclusion that John and he can’t be friends anymore.  Just because of the color of his skin.

If we are going to overcome racism, if the Black Lives Matter movement is going to bear good fruit, we must look to our children.  We have to remember that they see and hear more than we could ever imagine, and they will learn from our example.  We must teach our children not to be color-blind, but to see the world with all its beautiful colors.  We must teach them not to ignore the colors of others, but to embrace them as a valuable part of who we are.  We must teach them that being different does not mean being better or worse, but just that, different.

And there’s nothing wrong with being different.  There’s nothing wrong with being black or white.  Our different colors help to paint a beautiful picture of a world that we all want our children to grow up in, a world that we will give to our children one day.  We can help create that world for them, but we first must be willing to change ourselves, to abandon all of our prejudices, and to see the world through the eyes of a child.