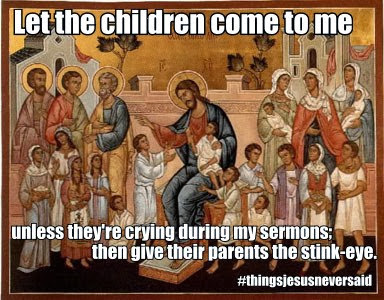 This past weekend, while I was sitting in my regular pew for Mass, a baby began crying in the back of the church.  He wasn’t overly distracting.  He was not throwing a temper tantrum.  He was not screeching at the top of his lungs.  He was simply crying, most likely because he was hungry or needed a fresh diaper.  Mass was about five minutes from wrapping up, and I imagine the mother or father decided to wait out those last five minutes.  They wanted to stay for the final blessing.  They wanted to be present to the very end of Mass, if only because it was incredibly cold outside and the wind was strong enough to bring tears to my eyes.  Maybe the parents were reluctant to leave, knowing that in just five minutes the church would have already cleared out and they would have some privacy while they attempted to satisfy their baby’s needs.  Maybe they thought it would make more sense to just wait out those last five minutes.

I wasn’t overly distracted by the baby’s cries.  I wasn’t struggling to ignore the baby’s screams so that I could focus.  If anything, the sound brought a smile to my face.  It brought visions of the future to my mind, flashes of the upcoming weeks, when Andrew and I would no longer be sitting in a pew by ourselves.  The sound reminded me that our baby boy was just weeks away from joining our family.  In just a few weeks, Andrew and I could be the ones struggling to comfort a hungry infant just five minutes before the end of Mass.  As nervous as the thought made me, it also brought me a great amount of joy.

It seems absurd, but I have honestly heard people argue along these lines.  Apparently, crying babies can hinder and even ruin your relationship with God if they’re distracting you.

My immediate reaction was actually one of fear.  What would happen when my baby cried?  What would happen if we had just five more minutes before Mass was over, and my little boy needed to tell me that he was getting hungry?  Would I be judged like this poor mother or father?  Would some disgusted woman grumble about my poor parenting skills because she knew that I wouldn’t be able to hear her?  For a split second, I found myself wondering if I could handle such judgment.  I found myself wondering if I needed to find another place to worship.  For a split second, that woman threatened to chase me out of my own parish, the parish that had embraced me whole-heartedly, the parish that was eagerly awaiting the birth of our son with my husband and me.

Fortunately, these fears lasted for only a split second before I remembered that they were largely unfounded.  Sure, this woman was sitting in the church that I had come to call my own.  Sure, she might be a regular attendee, even though I had never seen her before, but she was certainly the minority.  This was the parish that celebrated with me when Andrew and I learned that we were expecting our first child.  This was the parish whose members regularly dropped into my office to find out how I was doing, if I needed any boxes lifted, if I was getting enough sleep at night and enough food during the day.  This was the parish that decided to throw a baby shower for Andrew and me.  Clearly, my parish was thrilled about the additional member of their family, who will be formally recognized as such just a few weeks after he enters this world.  This was not a parish that generally frowned upon the cries of infants.

For my parish, such cries, even when they more closely resemble the high-pitched screeches of a dying cat, are a sign of life.  Parents are not to be chased from their pews, chased out of the church, because their infant children are hungry.  They are not to be judged, ostracized, or made to feel that they are unwanted.  Parents, and the infants that they love, are to be embraced, supported, and celebrated.  New parents’ tired eyes, vacant expressions, and barely groomed heads are all signs of the life of the Church- because they have given life to the children of God who will one day inherit the Kingdom of Heaven here on earth.

In my years as a Director of Religious Education, and before that, in my Youth Ministry work, I have heard some horror stories from new parents.  I have heard about priests who regularly ask parents to remove crying babies from the church because they are viewed as an obstacle to prayer.  I have heard about disgruntled elderly women telling new parents that church is no place to bring a child prone to crying, even if that’s his or her only means of communication.  I have heard about teary-eyed mothers walking out of church after getting dirty looks from the people in neighboring pews during the Sign of Peace.  And these are not women who do not discipline their children.  These are not fathers who never bother to tell their children ‘no.’  These are not toddlers throwing tantrums and screaming at the top of their lungs because Mommy won’t let them crush Cheerios and spread them all over the floor.  These are mothers and fathers who are simply working to meet their infants’ needs.  These are newborn children whose only means of communication is crying. 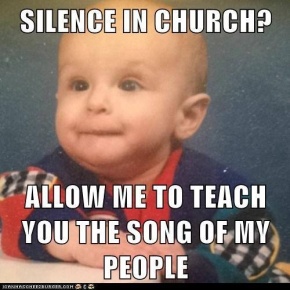 If we don’t want to chase away the future of our Church, we have to rethink our approach to parents in the pews.  These new mothers and fathers deserve patience and mercy, not condemnation and judgment.  New parents need support.  They are facing sleepless nights as well as multiple nighttime feedings, possibly for the first time.  They are trying to console colicky babies, attempting to keep it together as they watch their baby scream in pain.  They have had family and friends helping them since their child’s birth, but for the first time, mother and father are making a solo trip to church.  As they sit in the pews, with the infant soundly sleeping beside then, these parents are praying that their child remains silent.  Mommy might be praying that she doesn’t need to nurse in public for the first time just yet.  Daddy might be praying that his little daughter doesn’t need a fresh diaper after an explosion of the grossest kind right in the church.  They are praying that they will get through the next forty minutes, the next twenty minutes, the next five minutes.  And then it happens- the baby girl begins to cry.  Mommy and Daddy look at each other in fear, and wordlessly reach a consensus- they will wait those last five minutes.  They will hope for mercy and patience.  They will hope for understanding and sympathy.  But will they be given it?  I sure hope so- the future of the Church depends on it.