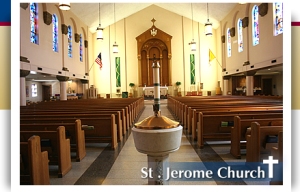 Recently, I spent the weekend in Washington, DC, and I had the opportunity to attend Mass at the parish near my boyfriend’s house, St. Jerome’s.  I have been there several times in the past, but as I sat in the pew meditating on the words of the priest’s inspiring and well-delivered homily, I also found myself wondering, Why aren’t all Masses like this?  The liturgy at St. Jerome’s is generally referred to as a “high Mass,” though from what I understand from Church history and the development of the liturgy, that’s not strictly true.  But the Mass at St. Jerome’s does have a lot of the qualities characteristic of the high Mass celebrated prior to the introduction of the Novus Ordo Mass.  There’s incense, and more than the typical amount of lit candles.  There’s always at least one priest and a deacon, and the altar servers are always male and of varying age.  There’s a choir and an organ, and no tambourines or guitars.  And finally, most people come dressed in traditional “church attire,” and being “dressed down” for Mass translates to wearing jeans with a nice blouse or button-down shirt.  It’s the antithesis of my home parish.

Don’t get me wrong- I love my parish.  The priests are kind, and really know the parishioners (or at least the ones who show up on a regular basis).  The parishioners are generous with both their time and their money.  In fact, when I entered a religious congregation (you can read more about this experience and my transition back into the “real world” here), they contributed quite a bit to my “get-Shannon-out-of-debt-so-she-can-become-a-nun” fund.  My parents were married there.  I received all of my sacraments there.  I went to the parish school for kindergarten through eighth grade.  I even worked there while I was in high school.  It’s always been my home, and the parishioners are like my family.  Of course that doesn’t mean that my parish is not without its flaws.  Masses are heavy on Marty Haugen and David Haas, and light on the “bells and smells.”  The homilies might be inspiring, but it’s hard to follow them when the family behind you is chatting about their plans for the afternoon and the elderly women in front of you are bickering about the rising costs at the town’s salons (true story).  And of course being “dressed down” means coming in sweat pants.  And yes, while it might be true that God loves us no matter what we’re wearing, and a Mass with mediocre music and an uninspiring homily is still a Mass and if Jesus still deigns to become bread and wine then we should just hush up and listen or open our mouths and sing, I think there’s a lot to be learned from St. Jerome’s.

But back to my original question: Why aren’t all Masses like this?  My first thought was: not all people are like this.  The parishioners at St. Jerome are undeniably different from those at my own parish.  Most of them act differently, dress differently, approach the Mass differently.  They sing when they are supposed to sing, speak when they’re supposed to speak, and listen when they’re supposed to listen.  During the Liturgy of the Word, there is very little whispering, and the only identifiable noise is the sound of the occasional fussy baby.  Children sit silently beside their parents, or as I witnessed on one occasion, leave their parents’ side only to creep closer to the altar so that they have a better view of the priest.  People just seem to be more reverent and focused, and it seems as though most people are there for the same reason: to worship God, thank Him, and ask Him for help.  They are not there to gossip, or to socialize, or to “fulfill their Sunday obligation.”  It just seems that the parishioners at St. Jerome’s really understand what they are doing and why they are doing it.  They are coming to worship, and so they dress for the occasion.  I mean, if you were going to be face-to-face with God, wouldn’t you want to dress your best, wouldn’t you want to show that you’re thankful and overjoyed by His presence by singing, responding, and listening when you are supposed to?  Sometimes, when I am at home, I forget this fact, but at St. Jerome’s, it’s hard to forget where you are and what you’re doing.

And that brings me to my second train of thought.  Yes, it’s true, not all parishioners are like the ones that I’ve met at St. Jerome’s.  In fact, I’d venture to say that not all the parishioners at St. Jerome’s have all the characteristics of the picture that I just painted.  But it’s undeniable that a larger percentage of St. Jerome’s parishioners seem to have a fuller understanding of the Mass than do the people at my parish.  While some of that can be attributed to a hub of Catholics who were either raised in the D.C. area or moved there, I also think that if I interviewed the people who typically attend Mass at St. Jerome’s, I’d find at least one person whose faith was shaped as a result of their time at the parish for every person who already had this kind of faith when they arrived.  As often as the people there have formed the atmosphere that I have come to associate with St. Jerome’s, I think that this atmosphere has also helped to form the type of person that I associate with St. Jerome’s: devout, family-oriented, and appreciative of the reason we go to Mass in the first place. 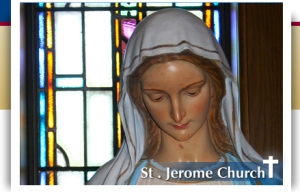 I might have a degree in Theology, and I might have spent some time in the convent, but that does not mean that I am perfect.  I want to become a saint, but I still have a long way to go.  If I was to be tried, I would be found guilty of the same sorts of things that most Catholics are at one time or another (or habitually)- being distracted during the homily, talking before Mass begins, and not coming to Mass prepared.  I try to at least survey the week’s Scripture readings before I’m sitting in the pew on Sunday morning (or evening, as is often the case), and I try to stay focused throughout the entire Mass.  I try not to talk with my neighbors, and I try to dress like I’m going to meet Jesus.  But sometimes I fall short.  Sometimes I forget to preview the readings, or I intentionally choose another activity that seems more interesting.  Sometimes my mind wanders, or I spend half of the homily thinking about what my topic for next week’s prayer service will be.  Sometimes I answer a question my mother asks me, or I make a comment that might not have been strictly necessary.  And sometimes I’m in a rush and go to Mass dressed as I am, or I’m just too lazy to change.  As much as I would like to be, I’m not perfect.  I still have a lot of growing to do.

But my time at St. Jerome’s has helped me immensely and shown me a great deal.  When I attend Mass there, I do not feel tempted to talk; silence reigns supreme around me and I do not feel at all inclined to break it.  My mind is less inclined to wander during the homily, not only because the priests keep you engaged and interested, but because everyone else around me is making every effort to pay attention- even the children.  Put simply, I pray better at St. Jerome’s than I do at other churches.  But don’t get me wrong- I’m not suggesting that other parishes, my own included, are failing me in some way.  Ultimately, I’m failing my parish when I come to Mass unprepared, easily distracted, and already anticipating the end of Mass.  It’s not like my parish is making me talk with my neighbors, distract myself during the homily, or come to Mass unprepared.  I’m the one who chooses to talk, distract myself, and be neglectful.  With some self-discipline and perseverance, I’m sure I could reach the point where I’m not tempted by these things even when surrounded by chatting neighbors, children throwing crayons at each other, and people who are more interested in reading the bulletin during the homily than listening.  But I’m just not that strong.  I need help, and that’s why I find that I pray better when I’m at St. Jerome’s.  I’m provided with the environment that I need to thrive, being weak and easily tempted.  St. Jerome’s helps me.  The parishioners help me.  And I help them.  We help each other, as we all strive to overcome temptation and glorify God together.

So, no, I’m not condemning my parish, or my fellow parishioners.  And I’m not idolizing St. Jerome’s either.  I realize that my home parish has its strengths, and that St. Jerome’s has its weaknesses.  The important thing is that Jesus Christ has chosen to take the form of bread and wine during every Sunday Mass- at St. Jerome’s, at my home parish, and at every other Catholic Church in the world.  Every parish has its sinners, and every parish has its saints.  I am always striving towards sanctity, regardless of where I choose to fulfill my Sunday obligation.  I just feel like I get a little closer in some churches than others.  Ultimately, everyone has the same question asked of them, regardless of where they attend Mass: Do you want to be a sinner, or a saint?

One thought on “The Mass Conundrum”