Most of the time, when I say the word ‘epiphany,’ I just get funny looks.  It’s not a word that is well known, even among practicing Catholics.  In many parishes, the feast day that is traditionally called the Epiphany goes by another name: Three Kings Day.  That’s what my own students usually call it, though over the past few weeks, they have become more accustomed to the other term as well.  At my parish, Three Kings Day is associated with camels casually hanging out in the school auditorium and the final gift of the Christmas season.  Every year, the Neocatechumenate community puts on a Nativity play on Three Kings Day, which features two real camels and on occasion, a donkey as well.  Parents who have become familiar with this tradition over the years know that they should hold one Christmas gift back because, as every child in my parish knows, the three kings always bring the last gift themselves.  It’s a wonderful tradition, and a great way for the family to celebrate this feast day together.

Even though my students generally refer to the Epiphany as Three Kings Day, they are also familiar with the more traditional term.  Or at least I hope.  We briefly discussed the Epiphany while we were watching The Nativity Story before Christmas, and considered it more deeply earlier this month when we talked about the arrival of the three kings, their gifts to the baby Jesus, and the gifts that we are invited to give to Jesus.  After sharing the story of the Little Drummer Boy, who believed that he had nothing to give the King but then gave the best gift of all- a part of himself, my students spent some time sharing what sorts of gifts they could give baby Jesus this Christmas season.  Christmas is a time of giving and receiving, but that is ultimately not what the feast of the Epiphany is all about.  It’s not about the gifts that the three kings brought, or really even about the three kings, but about Jesus Christ and His decision to reveal Himself to the world. 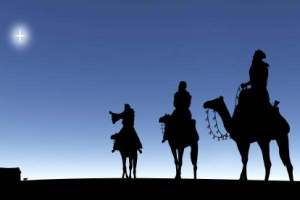 I recently heard something very interesting regarding the Epiphany, and two of the Sundays that follow it, which commemorate the Baptism of the Lord and the Wedding Feast of Cana (Note: The Gospel account of the Wedding at Cana is only read during year C on the second Sunday in Ordinary Time.).  Each one of these days is an epiphany of sorts.  Because ultimately, what is an epiphany?  It’s a sudden manifestation or realization, and in particular, it is a manifestation of the divinity of Christ.  During these three Sundays, which come one right after another, we celebrate three epiphanies of Jesus Christ’s divinity.  That’s right- you might have known that there was one Epiphany, but did you realize that there were really three?

The first epiphany is the one that most people are familiar with: Three Kings Day.  On this Sunday, we celebrate the fact that the Holy Spirit guided the three kings from the east, through the land of Israel, and to the place where the Son of God was born.  The three kings know that when they look into the face of the little baby Jesus, they are looking into the face of God.  They know this because the Spirit whispers this knowledge into their hearts so that they might worship this child for who He really is.  It’s an epiphany, made known by the Spirit.

The second one is less known: the Baptism of the Lord.  On this Sunday, we celebrate the fact that Jesus Christ, after living in secret for thirty years, is ready to begin His public ministry.  Before beginning the journey that will ultimately lead to His passion and death, Jesus Christ is baptized by His cousin John.  In the ultimate sign that He is truly united to us, Jesus Christ, the Son of God, descends into the Jordan River where he is baptized through the same ritual that is associated with repentance for sins.  Though He is sinless, Jesus Christ unites Himself to us, even in our sinfulness.  Eventually, He frees us from our sins through His death and resurrection.  Jesus is able to do this because He is both God and man, and even as His descent into the Jordan reminds us of His humanity, God the Father reminds us of His divinity as He declares, “This is my beloved Son, with whom I am well pleased.”  Jesus Christ’s humanity is not the only thing affirmed in His baptism; so is His divinity.  Once again, it’s an epiphany, but this time it is made known by the Father.

And finally, there is the third epiphany: the Wedding Feast at Cana.  When we have the good fortune of hearing this passage, we celebrate Jesus Christ’s first miracle.  His baptism in the Jordan signals the beginning of His public ministry, and the wedding feast at Cana brings this new era in Christ’s mission to life.  When the newly married couple is faced with the possibility of embarrassment that would be devastating to their future reputation, Mary begs her Son to help them.  Though this miracle is the first step that eventually leads Christ to His cross, Jesus consents and turns the water into wine.  By this miracle, Jesus Christ reveals who He is.  The wedding feast at Cana foreshadows what is to come.  Jesus Christ changes water into wine at a wedding feast; at another wedding feast, Jesus Christ changes wine into His Blood (check out the book of Revelation if you don’t like my comparison- it’s entirely biblical).  By both of these miracles, Jesus Christ reveals His divinity.  For a third time, it’s an epiphany, but this time it is the Son Himself who makes it known.

Three Sundays.  Three stories from Jesus’ life.  Three Epiphanies.  One for each Person in the Trinity.  Now, don’t misunderstand- you can’t totally tie only one Person to each of these instances.  For one thing, Jesus Christ, the Son, is present at each of these Epiphanies, and the other Persons are present at each Epiphany as well.  The three kings couldn’t have worshiped Jesus Christ if God the Father hadn’t given Him to us first.  And the Scriptures make it clear that the Holy Spirit was present at Jesus Christ’s baptism, just as the other two Persons of the Trinity were.  But that doesn’t discredit the idea that these three epiphanies of Christ can each be linked to one Person of the Trinity.  It was the Holy Spirit who led the three kings to Bethlehem, where they were inspired to worship the child that they recognized as the Son of God.  It was God the Father who announced to everyone present at Jesus’ baptism that this was His own divine Son.  And it was Jesus Christ Himself who announced to the world that He was God when He worked His first miracle at Cana, which would eventually lead Him to the ultimate miracle: a broken body that would be buried, only to rise again on the third day, and finally take the form of bread and wine that could be consumed by man.  Jesus Christ was not revealed to be God for the sake of gloating, but to give man the chance to become like God himself.  Jesus Christ revealed Himself as God made man so that man, who had been made in His Divine Image but had fallen, could become like God again.

One thought on “Celebrating the Epiphany with the Trinity”