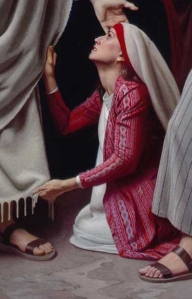 A few days ago the Gospel reading at daily Mass was the account of the woman with hemorrhages (you can read the entire passage here– it’s verses 25 to 34).  According to the version found in Mark, which provides a few more details than the one found in Matthew, Jesus Christ is on His way to heal the ill daughter of a synagogue official, but His travels are made more difficult by the sheer amount of people who have begun to crowd around Him.  They have heard Him preach and have witnessed His miracles, and now they have been promised another one: the healing of a child.  As Jesus navigates the crowd, a woman afflicted with hemorrhages, an ailment that would have marked her as an outcast, touches His cloak and finds herself healed.  According to Mark, Jesus feels this power leaving Him and asks the crowd, “Who has touched my clothes?”  This question had always struck me as odd, and even the Apostles are confused by it.  Frankly, the question seems to be a dumb one, and the Apostles seem to agree.  We are surrounded by thousands of people- of course people are going to touch You, they must be thinking to themselves.  Yeah, there’s a very good chance that the woman suffering from hemorrhages wasn’t the first or the only person to touch Jesus’ cloak.  She was probably one of many people struggling to keep her footing as she worked to move closer to Christ, one of many people being jostled by the crowds.  And yet Jesus Christ, surrounded by people bumping into Him, asks, “Who has touched my clothes?” 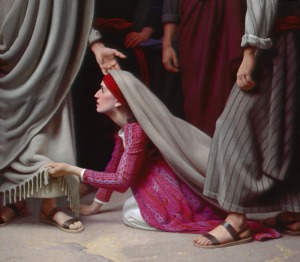 It seems like a silly question.  But Jesus is by no means silly, so there must be more to the situation than meets the eye.  Here’s the difference between the suffering woman and everyone else touching Jesus.  While they do it by accident or simply because they want to touch Him, she does it out of a sense of desperation.  And out of faith.  She has been scorned and ignored by the world; she wants to be seen and accepted.  She has suffered from the same affliction for twelve long years; she wants to be healed.  And she believes that Christ is the answer to her prayers.  She believes in Him.  She has faith, and her faith is rewarded.  When she intentionally reaches out and touches His cloak, believing with her whole heart that simply by touching Him she can be healed, Jesus Christ asks, “Who has touched my clothes?” The reaction of the crowd was probably immediate.  Previously boisterous with the whisperings of future miracles, an instantaneous hush probably fell upon the crowd.  The people who one moment ago crowded around Him probably backed away, hands raised as if to say, “It was not me.”  The people who had been so desperate to see Christ fade away in an effort to blend in with the surrounding crowd, and in that moment, the ailing woman has the chance for her miracle. 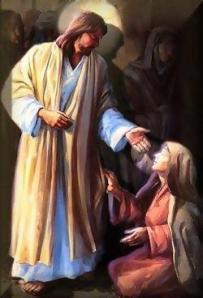 Realizing that she has been healed, the woman approaches Christ and falls at His feet.  After hearing this woman declare the truth, I imagine that He lovingly reached down and lifted her up from the ground as He declared, “Daughter, your faith has saved you.  Go in peace and be cured of your affliction.”  The woman has been healed of her hemorrhages, but she has been given so much more than that.  When she reached for His cloak, the woman was not only seeking a physical healing, but a spiritual and emotional one as well.  Suffering with hemorrhages for twelve years, she has also endured twelve years of being scorned and ignored.  When she is healed, Christ asks, “Who has touched my clothes?”  Did He already know the answer?  Of course He did.  He did not ask because He needed to know who had touched him, but because the woman needed to know who loved and accepted her.  In the wake of His question, the crowds probably fell silent and backed away, and from the midst of the crowd, the woman emerges, falling at the feet of Christ.  She is seen, and she will henceforth be known not as a woman of suffering, but as a woman of faith.  Yes, she has been healed of her physical affliction, but Christ’s miracle goes much deeper than her ailment.  Christ does not just heal her body, but He heals her heart, mind, and soul.  Her wounds, no matter how deep, are healed.  She is made new. 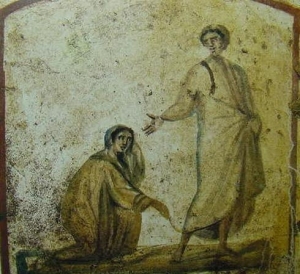 Christ did not need to ask, “Who has touched my clothes?”  He didn’t even need to heal the woman.  But He did heal her, and He did ask the question.  She was healed because of the faith that she had shown, first by believing that she would be healed simply by touching His cloak, and then by answering His question.  Do I have the faith needed to believe that Christ can heal my wounds?  Do I have the courage to reach out for Christ?  Do I have the humility to acknowledge my weakness and answer Christ as the woman did?  It was me that touched you, though I had no right.  It was me that hoped that You could heal me of my pain and suffering.  It was me who believed that You would see me and show me the love that has always been denied me.  It was me.  It was me.

One thought on ““Who Touched Me?””