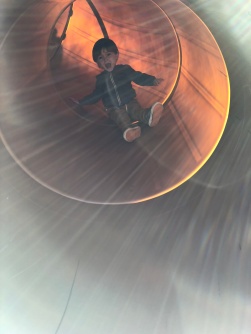 Since first announcing that I was expecting again, I have had many people ask me, “How did you know you were ready to try again?”  My answers vary, and cover the whole spectrum from, “I didn’t,” to “I just knew,” with everything in between.  Some of my answers even seem to contradict, but I really do think they’re all accurate, just in different ways.

In a very real sense, I didn’t know if I was ready.  I still don’t know if I’m quite ready.  Well, let’s be honest- I’m not.  I haven’t had to balance caring for two little human beings yet, so there are plenty of times where I just don’t feel like I’m ready yet.  And practically speaking, I am DEFINITELY not ready yet.  Felicity has about three outfits, only one of which would actually fit her as a newborn, has nowhere to sleep yet (though I guess we could always break out our Pack-N-Play), and doesn’t have a car seat yet (though we could technically use John’s with some adjusting, if it was absolutely necessary).  Right now, most of Felicity’s things- her clothing, new Rock-N-PLay, and carrier carseat are all being stored at my mom’s house, along with a few other things, and we don’t expect to see them for another month.

There are plenty of times where I don’t feel like I’m ready.  I think about bedtime routine, or playtime, or snuggle time with John on the couch, and I know that those things will need to change once Felicity arrives.  John and I live on a very predictable schedule from day to day, and while I intend to adhere to that schedule as much as possible during those first few months while Felicity will be willing and able to sleep anywhere and be carried everywhere, I know that it won’t be easy, and it will still feel like a rock has been thrown into our beautifully simple, but delicate-as-glass, routine.  I already know that there will be plenty of times where both John and Felicity will want to be held, and I will need to choose.  I know that John will want to cuddle on the couch when Felicity needs to be fed, or changed, or put down for a nap.  I know that our life as a one-napper and a no-napper (me) will cease to exist.  I don’t feel like I’m ready for any of it, but I also believe that God will not leave me abandoned.

In a very real sense, I knew that I didn’t need to feel absolutely ready.  I needed to have faith that if God wanted us to have another child at this particular time, He would give us the grace necessary to do it.  I might not feel ready, but God will make sure I am ready.  A great deal of our decision was made in faith and trust.  Even if I didn’t feel fully prepared (and seriously, does anyone?), I knew that if I did what I was capable of and reached as far as I could, God would take care of the rest.  He would bring me to where I needed to be.  God made me a mother of two, a change that has occurred in my body and soul, just as much as Felicity has.

But not everyone wants to hear that.  In some ways, it sounds like a cop-out answer.  But it’s true.  Our decision to try for another child was made in faith and trust that God would provide us with what we needed.  But it was also made knowing that we needed to do what we could to prepare ourselves, not just physically, but mentally as well.  So, yes, there were a few life events that led us to make our decision that we were ready for another child. 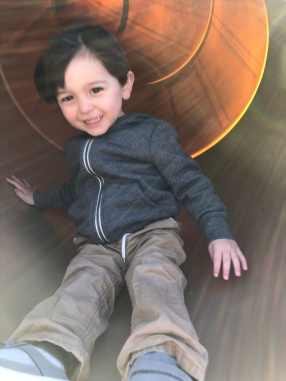 I knew I was ready when John was consistently sleeping through the night, and I felt confident that the occasional night-time wake-up was just that, occasional.  When I found myself going to bed on a nightly basis believing that it would be my alarm waking me up in eight hours, I knew that I was ready.  Very early on after John’s birth, Andrew and I made the mutual decision that we would wait until John was consistently sleeping through the night before we even considered trying to have another child.  We both knew that my mental health depended on it.

I knew I was ready when John was fully weaned off formula and baby food.  John transitioned to whole milk the moment he turned one, for very practical reasons.  The doctor had given us the okay to introduce him to milk, since he was a healthy, year-old boy.  It was also easier- milk could be purchased on the go, so when we were out for large chunks of time, we could choose to either bring a cooler of milk with us or buy milk while we were out.  By the time John turned one, he was drinking two eight ounce bottles a day, so it was really easy to buy a small container of milk while we were traveling.  In addition, it made sense financially- milk is much less expensive than formula, and as long as it’s refrigerated when he’s not drinking it, we don’t have to dump left-over milk after the one-hour mark.  The transition was actually a very quick and easy one- our pediatrician had suggested we start with a half-and-half mixture, but after John gulped down his two bottles with no issue that first day, we made the decision to just make the switch.

John took a very long time to wean off baby food.  He really struggled when he was learning to chew his food, so it seemed like a no-brainer that we should keep him on baby food until he grew more adept at it.  Our pediatrician agreed.  As a result, John was still having two baby food meals at 18 months old, and we only transitioned because he started to refuse to be fed.  Looking back, I suspect the baby food actually exacerbated the problem, since it really hindered his ability to chew, and this time around, we’re really hoping to try our hand at baby-led weaning to see if we can avoid this struggle.

Needless to say, formula and baby food are both expensive, so that had a large impact on determining when we felt that we were financially ready to have another.  We already plan on having to buy twice as many diapers, since we’ll theoretically have two in diapers for a while, so saving on food and drink was important to us.

I knew I was ready when John and I had settled into a very predictable, very comfortable routine.  I like stability, and routine, as does John, and I have felt much more confident in my abilities as a mother since settling into our routine.  John and I both thrive on routine, and while another baby will certainly throw a wrench in that routine, getting to this point was definitely pivotal in determining whether or not I was ready to have another child.  I needed a few months of reliable routine before considering the possibility of losing it, even if just temporarily.  I know plenty of people who really thrive in chaos, but I am not one of them.

Finally, I knew I was ready when looking at John caused my heart to swell so much that it threatened to burst.  A lot of people experience that sensation the moment that their child is born, and my love for John has grown exponentially since his birth, but the feeling became almost an overwhelming torrent of love around the time he was eighteen months.  There would just be these moments when I would look at John, and my heart would feel like it was going to burst because there was so much love, and it was just so strong.  That was when I absolutely knew that we were ready for another child.  John showed me.  When my love for him threatened to overflow, to overwhelm, I knew that it needed to be directed somewhere; it needed to be poured out and shared with another person.  The love that I felt for John stretched my heart wide enough to fit two little ones, and now I get to share that love with my baby girl, Felicity.