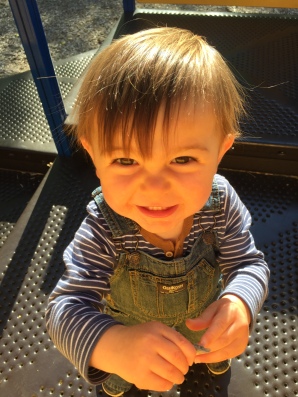 In the nearly three years that I have been employed at my parish, my job description has undergone some major changes.  When I was originally hired, it was as the part-time DRE.  My roles included coordinating the children’s faith formation program, providing continuing formation opportunities for the catechists, and implementing several of the sacramental programs for the parish, among a handful of random other tasks.  Nearly three years later, my job description has enlarged to include running a youth ministry program and a Vacation Bible School program, additions that reflect my change of status from part-time to full-time employee.

My arrival brought with it several changes in the life of the parish, as often happens when new employees are hired.  Several long-time catechists took it as their opportunity to gracefully bow out of our program after years, and in at least one occasion decades, of service.  Several programs had to be temporarily canceled as we transitioned from one DRE to another- I was graciously given an entire summer to become acclimated to the new parish rather than being thrown immediately into implementing the VBS program for that year.  With my focus on Marriage and Family Studies, my pastor and I revamped our Pre-Cana program, which was very well-received by the engaged couples who participated in it.

Many of the changes stuck, though some didn’t.  With my shift to full-time employment, we reintroduced our VBS program during my second summer.  During my first year, we had monthly catechist meetings as I worked to get to know my teachers personally.  Now we meet in person only three times a year, but we also participate in online formation courses together.  When I was originally hired, there were plans to drop our Pre-K/Kindergarten program, which coincided with the children’s Faith Formation classes (we had lost our teachers prior to my arrival) and replace it with the Children’s Liturgy of the Word during Mass.  With the beginning of the school year, we had numerous requests from parents that we bring back the Pre-K/Kindergarten program.  By November, we were back up and running, and talk of establishing a Children’s Liturgy of the Word was a thing of the past. 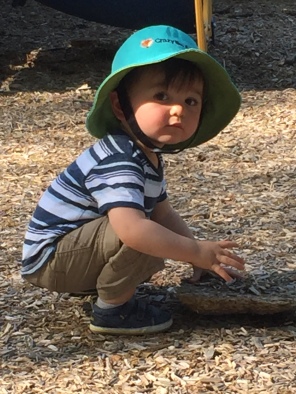 Honestly, I was not at all upset by this change of plans, though planning for a 50-minute program was inevitably going to take more time than a 20-minute program.  Like many Catholics, I was unsure how I felt about the Children’s Liturgy of the Word.  I knew that it was a heated topic of debate among Catholics, and I wasn’t entirely sure how I felt about the subject.  Instinctively, I didn’t like the idea of pulling the children out of Mass, so I didn’t put up a fight when it became clear that the Children’s Liturgy was not going to work out.

As a parent to a toddler, I cannot blame parents who advocate for the Children’s Liturgy because it allows them to focus on the Mass while their children are entertained (and hopefully educated) elsewhere.  Not every parent has the luxury of attending Mass once with their family (including their toddler) and again by themselves.  I know there have been countless Masses where I have not heard a single word of the readings or the homily because John was being particularly challenging.  The only reason I can keep my cool during those moments is because I know that I will have another opportunity to attend Mass while I’m at work the following day.  Most parents are not so fortunate as I am.

Like most Catholics, I have always considered Sunday Mass as an opportunity to refuel as I prepare to face the challenges of the upcoming week.  It’s a chance to refocus and start fresh.  Prior to John’s birth, I attended daily Mass regularly, and I received the Eucharist an average of four times per week.  With the arrival of John, everything changed.  Mass no longer felt as “rewarding” as it once did.  It no longer felt like an opportunity to refuel and refocus.  If I had once arrived at Mass feeling empty and left feeling refilled, now more often than not, I arrive feeling empty and leave feeling emptier.  I arrive tired and leave feeling even more tired.  I arrive stressed and leave feeling more stressed.  I’ve known more than a few parents who admit that Mass is the most stressful part of their entire day, that Sunday is the least restful day of their entire week.  I can understand why many parents see the Children’s Liturgy as a saving grace. 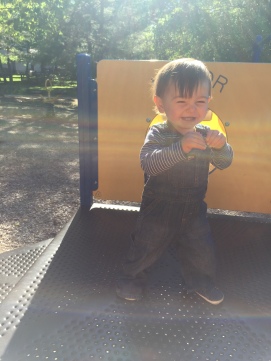 But honestly, I just don’t think the Children’s Liturgy of the Word is the answer.  I don’t think that taking our children out of the Mass is going to solve our problem.  First, I think we need to change the way that we approach the Mass.  Ultimately, it should not be about what we can get out of the Mass.  I think we have it backwards- ultimately, it’s about what we give.  Ultimately, it’s about God and it’s about worship.  Mass is about recognizing the power and glory of God and giving Him the praise that is rightfully His.  It’s about acknowledging our position as creature and His position as Creator.  In a very real way, our problem is that we are entirely too me-centered, and not enough God-centered.

When we take the focus off of ourselves and place it on God, there’s this very real and wonderful side effect- our personal feelings and experiences don’t matter so much.  We can spend the entire hour pacing back and forth, or else trying to control an uncontrollable toddler, and that hour was not in vain.  We can miss every other word of the readings and the homily, or else somehow miss the consecration entirely because of our wailing infant, and that Mass still has value.  It still has meaning.  And incidentally, it’s still giving us that fuel and fire that we so desire.

We might feel drained, tired, and empty when we walk out of those doors, but that doesn’t mean that our efforts have been futile.  In fact, our efforts have very little to do with the final effect.  In the end, regardless of how we might feel, the effect is the same: we have been refueled.  We still possess Jesus Christ within us; we have still united ourselves with God.  Our lives might have changed dramatically with the birth of a child, but God has not changed at all.  He is still there, whether we feel Him or not.  He is still giving us strength, whether we feel it at the moment or not.  Yes, parenthood is challenging, and attending Mass with a child is often difficult, but I know that I am a better mother for having done it.

I think that it’s important that we let our children stay with us for the entirety of Mass, that they can be surrounded by the parish community, that they can hear the Scriptures proclaimed by the lectors and priest.  By all means, I think it’s important to make sure that our children understand the readings, but I think that the proper place for that is outside of the Mass.  If our children are allowed to stay with us, they can stay in the presence of God in the church.  If our children are allowed to stay with us, they will learn what is considered proper behavior for a worshiping believer.  As members of the faith community, even the smallest believer has the right to remain.  Jesus once told his disciples that He wanted the little children to come to Him; He wanted them to stay.  I don’t think His opinion on the matter has changed.  I think He still desires that the child be permitted to remain.  He wants them to come.

Sunday Mass remains the most challenging part of our week.  Fifty minutes in a pew can be difficult for a toddler who just wants to walk, wants to run and scream, wants to play.  It can be difficult for most children who can only sit still for so long.  It’s challenging, but I don’t think that the answer is to take our children out and send them to the Children’s Liturgy of the Word.  In the end, I don’t think it’ll benefit them, and it might not even benefit us.

Before John was born, I was in the habit of attending daily Mass several times a week.  It was a habit that I was not very enthusiastic about giving up, though for the first few months, I was definitely too overwhelmed to bring him by myself.  As I became more confident in my parenting abilities and John’s nap schedule became more predictable, I decided to give the rather daunting task of bringing John to daily Mass by myself a shot.  He was still a challenge to manage during the Sunday liturgy, but I reasoned that the shorter daily Mass might be more manageable.  I was right.

John can get through most daily Masses just fine.  Sure, he spends some of the time admiring and chatting with the other children who sit with their parents in the back, some of the time drinking his bottle, and the rest of the time alternating between eating puffs and throwing them on the floor, but most days we can make it through the entire Mass without having to leave.  Over the past few months of taking John to daily Mass, he has gotten increasingly better at sitting through the entire weekday liturgy, and I am even inclined to say that his “practice” during the week has also helped his behavior on Saturday evening, when we attend the Vigil Mass together. 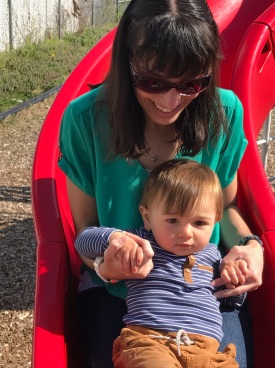 So when John is a bit older, if we worship at a parish that offers the Children’s Liturgy of the Word, will I let him leave?  No, I don’t think so.  No matter how challenging attending Mass with a toddler or child might be, no, I don’t think I would encourage John to leave.  I think he’ll learn more by sitting in the pew.  I think he’ll benefit more spiritually by remaining with his family.  And if he asks why he can’t join the other children who do leave?  I’ll just tell him that Jesus wants him to stay.  Jesus has invited him to come and wants him to be there.  And who are we to say no?