This past Friday, while we began the transition from Thanksgiving to Christmas in my parents’ house, Andrew and I found ourselves talking about Christmas traditions.  While we were dating, and even while we were engaged, we agreed that we would spend the holidays with our own families. We had only been dating for a few months when our first Christmas arrived, and that would be the only Christmas that we spent dating.  By the following year, we were already engaged and faced with the reality that this would be our last year spending all the holidays with our families.  The next year, as a newly married couple, we began alternating holidays, Thanksgiving and Christmas Day with one family and Christmas Eve and Easter with the other.  It was an arrangement that we had stuck with even after the birth of John, one that we did not intend to change.  But as we chose Christmas stockings for ourselves and our son, we realized that while we had thought out where we would celebrate the holidays, we had not given much thought to how we would celebrate them.

Growing up, we spent countless Christmas Eves at my grandparents and an equal number of Christmas Days at home.  One year blends into the next; the only detail that changed from one year to the next was the number of places set at the table.  Every Christmas Eve, we attended the Vigil Mass as a family before driving to my grandparents’ for dinner.  When we still believed in Santa, we were ushered through the door and up the stairs of the two-family house to where my aunt and cousin lived, and I remember distinctly stories of Christmas angels at work downstairs, a remnant of my mother’s childhood.  My mother had been raised with stories of the Christmas angels that delivered gifts to good children to celebrate the birth of Jesus Christ, just as my classmates believed in jolly old Saint Nick, AKA Kris Kringle, AKA Santa Claus.  My siblings and I considered ourselves lucky- we were visited by both during Christmastime.

The Christmas angels came to my grandparents’ house every Christmas Eve and delivered their gifts while we explored my aunt’s Christmas village upstairs.  We would then open them (after taking the traditional family photo) before sitting down to dinner.  Afterwards, we’d be whisked back home and tucked into our beds to await the coming of Santa Claus.  My siblings and I had an understanding between ourselves, one that we maintained until we learned the value of sleep- whoever woke up first would wake the others.  We would then tiptoe down the stairs and knock softly (or not-so-softly, as the case might have been) on our parents’ bedroom door.  We would then be given permission to open one gift, or once I was tall enough to reach them, to go through the Christmas stockings that hung on the wall-unit.  Once we were bored with that, we’d creep back to the door, repeating the process until a more reasonable hour of the morning, when our parents would join us in the living room. 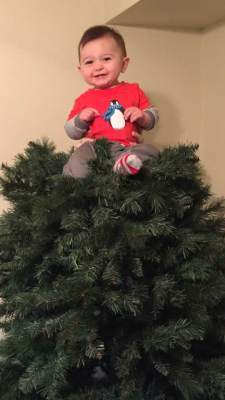 As Andrew relayed texts from his mother about Christmas gifts to me, I was struck by a minor detail regarding our Christmases growing up that I had never considered.  When we went over to my grandparents’ house, the gifts that we were given came from the Christmas angels.  When we woke up on Christmas morning and stealthily peaked at the Christmas gifts beneath our tree, we knew that they came from Santa Claus.  And when our paternal grandparents came to visit later in the day, the gifts that they brought over also came from Santa, dropped off at their house as one final gift for us.  We liked getting gifts throughout a twenty-four hour period.  If we didn’t get our most coveted gift on Christmas Eve, it might be waiting for us beneath our tree, and if not there, then maybe beneath our grandparents’ tree.  The possibilities seemed endless.

We were never struck by the fact that our parents and other family members didn’t get gifts for us for Christmas.  Christmas was a time to give other people gifts, of course, but it wasn’t a time to get gifts, not from our parents at least.  Christmas was a time of magic, of gifts created and wrapped in the legendary North Pole by little elves, loaded into a magical sleigh pulled by reindeer, piled beneath our tree by Old St. Nick himself.  We had never questioned our situation because we had never known otherwise.

In fact, I had never considered doing anything other than what my parents had done for us.  I had taken it for granted that we’d give our children gifts for their birthday, but that Santa would get them all their Christmas gifts.  Maybe the gifts beneath my parents’ tree would come from the Christmas angels, just as we had done as children.  But it never occurred to me that we would give our children gifts for Christmas.

But as Andrew and I discussed our Christmas plans, it became obvious that Andrew had expected just that.  And for good reason.  Growing up, he and his sister had woken up to a tree with both wrapped and unwrapped gifts beneath it.  In their family, wrapped gifts came from family and unwrapped gifts came from Santa.  There was an obvious distinction, and even from a very young age, Andrew and his sister were able to tell the difference between those gifts from Santa and those from their parents.

In a year or two, we’re going to have to make a choice, and we’re going to have to commit to that decision for the next ten plus years.  Will John only get gifts from Santa, or will he get gifts from Mom and Dad too?  Where will he open the majority of his gifts- beneath his own tree or someone else’s?  Which is more important to us- having our little boy walk sleepy-eyed from his own bedroom in our apartment to open the Christmas gifts beneath his own tree, even if it’s a week after Christmas, or having him awaken at his grandparents’ house to a room littered with gifts for countless family members?  Which means more to us- having John creep from his own bedroom into ours to ask us for “just one present” or experiencing the gift-opening mayhem followed by meals surrounded by family?

With Christmas quickly approaching, discussions of family traditions are inevitable, but this year, there is more of a drive to compare and contrast our upbringings as we decide what traditions we will hold on to, which we will abandon, and which will be changed to suit our current situation.  Last year, the reality of our lives as parents had barely dawned on us.  Yes, I was seven months pregnant, but a life with our son still seemed so far away.  This year is different.  We realize that our time to make some of these decisions is limited.  Eventually, John will remember from year to year, and he will know if we change anything with regards to Santa and his presents.  Fortunately, we still have at least a year to commit.  We have at least a year to make our decisions.  We have at least a year before we get to introduce our son to one of the most wonderful childhood traditions- Santa Claus.