I spent nine months preparing for John’s arrival.  I did my research, compared parenting philosophies, poured over the studies, and finally made my decisions.  Sometimes I asked for Andrew’s opinion before committing to a particular practice, but most of the time I explained it to him after I had already chosen.  Andrew trusted me to do most of the research, to compare and contrast habits, to make the right choice when it came to sleeping, eating, and drinking practices.  Now, nine months after the birth of John, I’ve come to the realization that the most valuable lessons I learned from my mother.

Andrew and I had all sorts of grand plans for our son.  I was going to nurse for a year or more, and we would engage strictly in baby-led weaning once he was six months old.  On the off-chance that we did use proper baby food from time to time, it would be homemade.  John would spend his first six months sleeping in our bedroom, first in a bassinet and then a Pack-N-Play, before he was moved into the crib in his nursery.  He would learn how to self-soothe with no tears, and he would take hour-long naps regularly.  Andrew and I were like so many first-time parents; we had no experience ourselves, so we turned to our most trusted source of information- the Internet.  I read all the latest studies and articles, became familiar with the most recent parenting philosophies.  I learned how to speak the lingo, spouting words like ‘attachment parenting,’ ‘baby-led weaning,’ and baby wearing’ like I knew what I was talking about.  As if reading the articles and studies made me an expert.  And when I was met with blank stares and looks of incomprehension from relatives, I was struck by how much had changed in thirty years and was grateful that such progress had been made in that time.

A lot has changed in thirty years of parenting.  As a late 80s baby, I was given formula from the very start and started mushy solids at four months.  I did not sleep in my parents’ room, and my mother was very go with the flow as far as sleep and naps were concerned.  She did have to let me cry at one point to break me of the habit of crying until someone rubbed my back, but that was short-lived (one night to be exact).  Andrew had been raised similarly, and many mothers on the parenting boards have posted photos of themselves as infants, faces covered in mushy baby food, holding bottles filled with formula, lying on their stomachs in cribs filled with blankets and stuffed animals.  Now, some of the changes of the past thirty years have been related to safety, and therefore shouldn’t be considered a matter of preference.  The back-to-sleep campaign has led to fewer infant deaths caused by SIDS, as has the stress on removing blankets and stuffed animals from the cribs of infants.  Other changes have been changes in preference, the inevitable shifts that accompany changing fads.   But I have learned in the past nine months that while fads inevitably fade and shift, the advice of your mother really is timeless.

My mother is one of the best advice givers I’ve ever met.  And it’s probably because you don’t even realize that she’s giving advice.  She just talks about her own experience raising my two siblings and me, never suggesting that she thinks that I should do the same as she did.  My mother has always been able to find the perfect balance between advising against certain choices and supporting my decisions.  She also has a very graceful way of telling you, “I told you so,” when you realize the error of your ways and end up doing exactly what she suspected you’d do from the very beginning.  The best example of this point: My mother supported my decision to join the convent even though she never expected that I’d stay.  She just thought it was something that I needed to do, that there was a lesson that I needed to learn, and she was right. 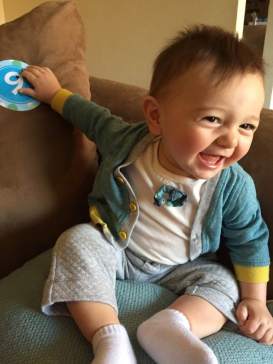 My mother knew about my parenting plans.  She knew that I wanted to nurse for at least a year, that I intended to have John sleep in our room for at least six months, that I wanted to wait at least six months before introducing John to finger foods.  She had done none of those things herself, but she supported my decisions (even though she was pretty confident that some of my choices would not last).  When I changed my plans, adopting the same methods that my mother had used with us, she made no comment about the switch.  She just continued to support me.  There was no “I told you so,” no reminder that the successful method was the one that my mother had used.  She offered her experience, her tales of my own infancy, but never pressured me to make the same choices.  If I followed in her footsteps, good; if I didn’t, that was okay too.

I nursed for three weeks before I chose to supplement with formula, and it was only another two weeks before my supply completely dried up.  John has been formula-fed ever since.  My mom assumed that I would switch to formula at some point, but supported me at every phase of my journey.  When John refused to sleep in his bassinet, encumbered by his underdeveloped gastrointestinal tract, she supported our decision to switch to a swing.  When I began to really feel the effects of the sleep deprivation, she supported our decision to move John into his own room, suggesting that this might help both my sleep and John’s.

When she learned that John was still spitting up and struggling to sleep at night when he was four months old, she suggested that we introduce him to solid food.  We abandoned our plans of waiting until he was six months old and skipping straight to finger foods, instead introducing him to homemade purees of apples, bananas, and green beans.  The effects were almost immediate- within days, John dropped most of his nighttime feedings and his daytime spit ups became largely a thing of the past.   Two months later, when I abandoned my efforts at homemade baby food in favor of the packaged variety and Saturday afternoons with my husband and son, she didn’t say anything.  Once again, she just supported my decision, one that she had made herself twenty-seven years earlier. 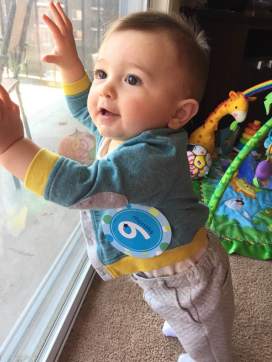 The Internet offers new mothers all sorts of support that wasn’t available thirty years ago.  It connects mothers from all over the country, all over the world.  It enables us to seek advice and answers at all hours, even when it’s 2:30 in the morning, and everyone you know is asleep.  It provides us with multiple methods, comparisons of philosophies, and countless pros and cons lists.  We are all fortunate to be mothers in the age of the Internet, with all its advantages.  But in the end, nothing compares to the advice of your mother, something that we of the Internet generation are apt to forget.

A lot has changed over the past thirty years, but even more has stayed the same.  We might be quick to seek the advice of the experts on the Internet, but our mothers are experts as well.  They are experts with years of experience under their belt, and what’s even more important, they are experts on you.  My mother is an expert on me.  She was not at all surprised when I left the convent, or when I switched to formula.  She wasn’t surprised because she knew me.  She knows what I’m like, and I am my mother’s daughter, just as I am my son’s mother.  I am her flesh and blood, just as John is mine.  There might be thousands of expert opinions on the Internet, but there is one opinion that I trust more than any other, and that is my mother’s.  She is my parenting expert, and I am convinced that my mother taught me everything that I needed to know about parenthood.