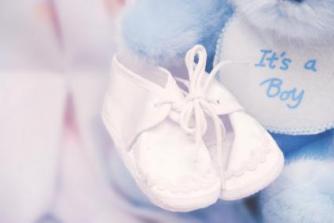 As you might remember, when Andrew and I found out that we were the parents of a baby boy at our twenty-week ultrasound, the news came as a bit of a shock, and it was accompanied by a dose of fear on my part. I had known that there was a fifty percent chance that our little baby was a boy, but I would be lying if I told you that I hadn’t been hoping that it was a girl. A girl just seemed so much easier. I knew how to mother a little girl; two decades ago, I had been one myself. I had the shining example of my mother to guide me, following in her footsteps and mirroring the techniques that she used in raising me. I had no idea how to be the mother to a little boy.

I also had ridiculous fears that my son would grow to resent me because I wasn’t like him. What could a girly-girl like me have to offer to a little boy? I knew about Barbies and playing house; I liked wearing dresses, figure skating, and dancing. I knew nothing about trucks or dinosaurs; I hated getting dirty and all animals lacking in fur or feathers. Even before my little boy was born, I was convinced that we would never bond. I was afraid that he wouldn’t love me, or that I wouldn’t be able to love him as much as I ought. But then his birth changed everything.

I realized almost immediately that I had no reason to fear that I wouldn’t love him.  I loved him as soon as I laid eyes on him, as soon as I held him in my arms for the first time.  I loved him as I rocked him to sleep each night, as I fed him each day.  I loved him as I wrapped my arms around his little body, as he snuggled close and yawned deeply.  I have seen nothing cuter than John’s yawns- I never would have thought that a face so tiny could have a mouth so big.  I fall in love with him all over again every time I see it.

And my love for him has only grown deeper over the past two months.  I loved him back when all he did was sleep, eat, and cry.  Two months later, I love him even more now that he can smile and baby-talk (now that he’s found his voice, it’s nearly impossible to get him to stop talking, even when we put a bottle in his mouth).  There’s nothing more rewarding than to look down at your son lying in his bassinet and to see him smiling up at you.  There’s nothing more adorable than watching as your little boy struggles to utter that first sound, and then launches immediately into a long string of baby-talk words.  And his baby-talk really does sound like words sometimes.  When we smile and say ‘hi,’ he smiles and says ‘hi’ back.  When we ask him something and finish our question with ‘yeah?’, he answers back with a ‘yeah’ too.  It’s really the most adorable thing ever.

So now that John is here with us, I have realized that all of my fears have been unfounded.  I am head over heels in love with my little boy, and he definitely seems to love me with all his big smiles and small words.  After struggling to bond with my little man at first, we have reached the point where my husband and I know our son better than anyone else.  We are becoming more attuned to the different cries he makes- when he is hungry, tired, uncomfortable, or lonely, and more often than not, we know how to meet his needs pretty quickly (though don’t get me wrong- we still have at least one meltdown a day as our sleepy baby fights his nap).  Even when I was struggling to bond with my little buddy, my love for him went deeper than my trials, and when we had addressed the source of the problem, they quickly became a thing of the past.  Love really is stronger than even the worst fear.

I’ve also realized that I don’t have to become someone other than myself for my little boy to love me. My son doesn’t need another man. He doesn’t need another father. Sure, I might learn to enjoy playing with trucks and action figures, and I’ll probably be the one to coach his baseball team, but it’s okay that I don’t like getting dirty. It’s okay that I still don’t like dinosaurs (though I did discover that if you put dinosaurs, or just about anything else, on coverall shorts, they can’t help but be adorable). I’m not a one man show. I’m not doing this on my own. When JT wants to go play in the mud, he can play with his Daddy while Mommy films the whole thing. If JT develops the same knack for memorizing the names of every single dinosaur, he can talk about them all with his dad. But I’ll still be the one buying him his dinosaur overalls.

2 thoughts on “The Gift of Little Boys”