As you can imagine, we spend a lot of time in class talking about marriage.  And family.  And love.  And the human person.  But back to marriage.  Many of our classes touch on the nature of marriage, and this vocation has been incorporated into classes on the Scriptures, Law, and even the Trinity.  So much comes down to marriage and the family.  It is the smallest cell of our society, and the most important.  It is the domestic church, and the place of the first encounter a child has with God (hopefully).  But it’s not indestructible.  In fact, it would seem that modern society has gone to great lengths to destroy it.  Marriage has been stripped of nearly all its meaning.  It’s a relationship between two (or more) people who love one another.  It’s a contract where one promises to remain faithful “until death do us part”…unless you change too much.  Or I stop loving you.  Or I decide there’s someone better for me out there.  Or I’m just not feeling it anymore.

There are many reasons to get divorced, but only one to get married.  Love. But love can only get you so far.  At least the kind of love that our world glorifies.  Love is so much more than fleeting emotions or compatibility.  I think G.K. Chesterton was right when he wrote, “I have known many happy marriages, but never a compatible one.  The whole aim of marriage is to fight through and survive the instant when incompatibility becomes unquestionable.  For a man and a woman, as such, are incompatible.”  The feelings will inevitably fade.  One day every bride is going to wake up and realize that her husband is not the man she married.  Every husband is going to find himself unable to explain what is happening in the heart of his wife.  When that moment comes, many people will choose to get divorced.  The majority of people will choose not to persevere in fidelity to the vows that they made on their wedding day. But it is always a choice. 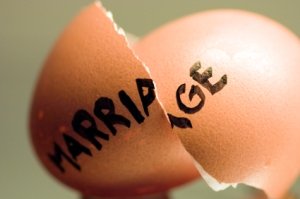 Just as a caveat before I continue.  This is not a post to condemn those who have gotten divorced and remarried, who have used contraception, or who have used IVF to have a child.  I know and love people who have made every one of these choices.  But I also know and love people who have been deeply affected by these same decisions.  I am not pretending that I know you and your reasons for your choice, and I am not suggesting that your decisions were not difficult.  But I am also not going to pretend that people were not harmed by these choice.  I am also not going to suggest that marriage has remained unaffected by the overwhelming cultural acceptance of divorce and remarriage, contraception, and artificial reproductive technologies.

The Catholic Church identifies three fundamental properties of marriage: unity, indissolubility, and fruitfulness.  Unity: a husband and wife become one flesh, sharing in a life of love together (and only with one another).  Indissolubility: marriage is for life, and cannot be “torn asunder by man” (Mark 10:9).  Fruitfulness: marriage is meant to bear fruit, often in the form of children.  These properties are linked to the three goods of marriage: marital union, the sacrament, and children.  It is good that spouses become one, joining two lives together in love and fidelity.  It is good that marriage should last for life, to be able to say “forever” and know it’s possible.  And it is good to bring children into this world, to love them and raise them to be faithful and loving.  These three properties of marriage make marriage what it is, and these three goods make marriage a good that we can embrace.  And yet modern society has targeted all three of these properties, has striven to eradicate all three of these goods.  But without unity, indissolubility, and fruitfulness, marriage cannot stand.  It will not be able to survive the attacks of man.  We could become a society that has moved beyond marriage.

Modernity has told us that marriage should be able to mean anything that we want it to, but in the end, with that definition, it will mean nothing.  If marriage can be whatever we want it to be, it becomes nothing at all.  In truth, marriage is meant to last forever.  It is meant to be a irrevocable vow between a man and a woman.  It is meant to be open to life, both spiritually and physically fruitful.  But now marriage is just a contract between two people who love each other that might last for life, but can end if either party ceases to the love the other.  It is no longer meant to last forever.

This contract can exist between a man and a woman, two men, or two women. because the nature of the people involved no longer matters.  Their existence as male or female doesn’t matter any more; it’s all about orientation.  Marriage is no longer about the two manifestations of man, whole in and of themselves, coming together as one.

And children?  Children have become a choice, and oftentimes they are reduced to a commodity.  The egg and sperm that bring about their beginning can be bought and sold.  Children can be conceived in petri dishes, only to implanted in surrogate wombs until they are born.  Children can have two mothers, or two fathers, or two mothers and two fathers, or any other arrangement among the countless combinations.  Spouses who want to have a child, no matter the cost, can betray their own marital bond, seeking donor eggs, donor sperm, and donor wombs.  On the flip side, spouses that don’t want to have a child, no matter the cost, can also betray their marital bond, ingesting identified carcinogens or slipping a piece of rubber between one another to prevent pregnancy.  They claim that their marriage is unaffected, but how could this be, when you are required to hold such a significant part of yourself back- your ability to procreate, to co-create with God and bring new children into this world?  Children have ceased to be a gift, and have been reduced a choice, a commodity.  But children are not a commodity; they are not a choice.