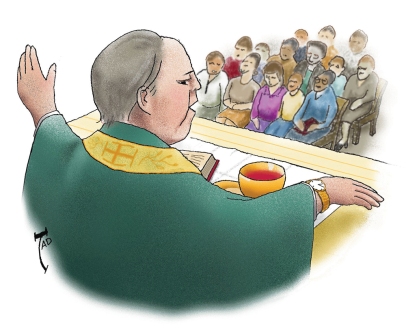 A few weeks ago, I read an article on the LifeSite News website regarding a retreat being held for gay priests, bishops, brothers, and deacons, as well as the response issued by Fr. James Martin. As you can imagine, homosexuality in the priesthood is a complex, difficult topic to discuss, and to be honest, I don’t think that either post did the topic justice, and that both parties have tried to oversimplify an issue that is incredibly complex in an attempt to make their points.

Fr. Martin failed to acknowledge the fact that there shouldn’t be any gay priests, etc. According to the 2005 Vatican document Instruction Concerning the Criteria for the Discernment of Vocations with regards to Persons with Homosexual Tendencies in view of their Admission to the Seminary and to Holy Orders, “the Church, while profoundly respecting the persons in question, cannot admit to the seminary or to holy orders those who practice homosexuality, present deep-seated homosexual tendencies or support the so-called ‘gay culture.'” Priestly candidates with same-sex attraction are meant to be identified during the psychological evaluations conducted during the admissions process, and such candidates, after being identified, are supposed to be turned away from the seminary. Ideally, a retreat directed towards gay priests, bishops, brothers, and deacons shouldn’t be necessary because such people shouldn’t have been admitted to Holy Orders in the first place.

But why shouldn’t men with same-sex attraction be priests? If the Catholic Church really means to treat men and women with same-sex attraction with respect, wouldn’t gay priests be the most adept at ministering to such people, experiencing the same inclinations themselves? The same document quoted above goes on to say, “[s]uch persons, in fact, find themselves in a situation that gravely hinders them from relating correctly to men and women. One must in no way overlook the negative consequences that can derive from the ordination of persons with deep-seated homosexual tendencies.” While the Church clearly teaches that experiencing same-sex attraction is not sinful (only acting upon those inclinations is a sin), the Catechism of the Catholic Church confirms that such tendencies should be considered disordered. These disordered inclinations make it improper to admit homosexual men to the priesthood.

Fr. Martin makes the claim that the men attending the retreat are committed to priestly celibacy. We are not talking about men who are actively engaged in homosexual relationships, but merely men who have received Holy Orders, despite the direct opposition of the Church. This might be the case, but it does seem unlikely that all the retreat participants are satisfied with the Church’s current teaching on priestly celibacy. At the very least, it sounds like this year’s retreat leader is a strong proponent for the end of priestly celibacy. I hope that his belief would only extend to heterosexual priests being allowed to marry women, and not to homosexual priests seeking permission to engage in same-sex relationships, which are clearly forbidden by the Catholic Church. 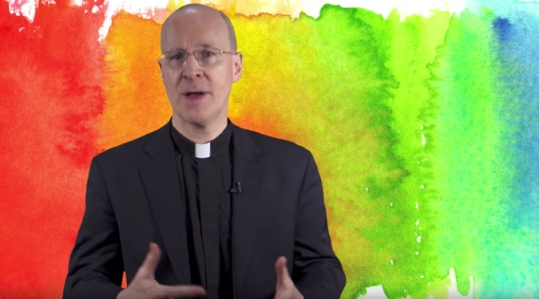 I imagine that Fr. Martin considers this retreat to be an opportunity for gay priests, bishops, deacons, and brothers to pray and reflect on the issues and struggles unique to those in their situation. Even if the Church specifically forbids men with deep-seated homosexual tendencies from being ordained, clearly her wishes are not being respected. We shouldn’t have gay priests, but we do, and now we need to deal with that fact. But is the answer really to encourage retreats with other men who bear the same cross? Unfortunately, if these men are looking for support in living a celibate life, they must do so in cognito, since gay priests are not supposed to exist in the first place. But maybe the answer isn’t holding retreats specifically for gay priests, deacons, bishops, and brothers. Maybe they shouldn’t hide. Maybe they should come forward, relinquish their collars, and seek the spiritual assistance that they desire.

One might argue that we already have a priest shortage, so it would be unwise to lose any more. And since these men want to be priests, why not let them? If they can and do live a celibate life, they should be allowed to continue their priestly duties, especially in light of the current shortage of priests. But I don’t think that’s the answer. I do think that it would be better to have less priests. We are called to trust our mother, the Church, and it has always been her practice to turn away men with deep-seated homosexual tendencies from the sacrament of Holy Orders. We are called to trust that she knows what she is doing, that she has our best interests at heart.

The answer to the shortage of priests is not to admit men with same-sex attraction to Holy Orders; it is to enable all those men who have been called by God to become priests to do so. We need to consider the way that we teach the faith, and the way that it is taught in Catholic families. We need to show young men that the priesthood is attractive. We need to help more young men fall in love with the Eucharist, and the sacrament of confession. And we need to make sure that the boys and young men in our parishes have healthy priest role models to follow.

The author of the LifeSite News article really seems to believe that the men attending the retreat have no intention of respecting the virtues of chastity and celibacy. If that’s true, I pray that they encounter Christ and open their hearts to repentance and God’s overwhelming love and forgiveness. Fr. James Martin really seems to believe that the men have every intention of remaining celibate and are simply gathering to feel the prayers and support of their fellow brothers in Christ. If that’s true, I pray that these men might have the courage to come forward and accept the decision of the Church regarding their priestly standing. I don’t know what happens at these retreats. I don’t know what these men come seeking. I hope they are seeking Christ. I hope they find Him. And I hope they allow themselves to find comfort, courage, and love in the arms of His Bride, the Church.