From the moment that I learned that I was pregnant again, I knew that this time would be different.   Two and a half years ago, when I learned that I was pregnant for the first time, I celebrated with Starbucks and spent the afternoon lounging on the couch as I scrolled through pages of articles regarding pregnancy, followed by pages of baby clothes, followed by pages of maternity clothes.  It was a lazy afternoon of searching the internet as I basked in the knowledge that I was pregnant.  Andrew and I had plans to meet at Catholic University later that day, so that’s where I shared the big news with him, with the help of a stuffed Rex doll that informed my husband that he had become a father.

This time around, there was no celebratory Starbucks beverage (at least not for the first few days), and there was no lounging around.  I took the pregnancy test, brushed my teeth while I waited for the results, found it positive, and then went to retrieve John from his crib for milk and breakfast.  Our morning progressed as usual, and while John napped, I showered and dressed for work.  With John, it had been mere moments before I had signed up for the Bump app and its weekly emails.  This time around, it was nearly an entire week before I finally got around to restoring my account with a new due date.

I didn’t really have time to bask in my new knowledge with this pregnancy; I was too busy tending to John, who had absolutely no idea that anything had changed.  My new discovery wasn’t going to change his habits, wasn’t going to halt his needs for food and drink, fresh diapers, and a play mate.  Had it not been for the fact that my plan for telling Andrew involved a t-shirt for John (which I had once again purchased months earlier), I probably wouldn’t have even had the time to do something creative.

In the weeks that followed, I didn’t have time to scroll through pages of pregnancy articles, or baby clothes, or maternity clothes.  Instead, I rode on the knowledge that I had gained the last time around, hoping that nothing major had changed in the past two years.  I gave very little thought to baby clothes, besides noting that if we had another boy, we would save loads, since John’s clothes were all neatly sorted into airtight bags divided by size.  As far as maternity clothes were concerned, all I was worried about was showing too early, before I’d had the chance to tell everyone the news.  I had plenty of winter clothes from my last pregnancy, and while I knew that I would need summer clothes eventually, I was not immediately concerned. 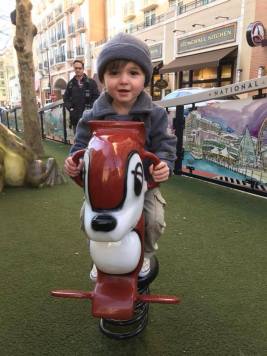 During the first few months of pregnancy with John, I stressed about everything.  I drank not an ounce of caffeine during my first trimester, though by the time the second one rolled around, I began to permit myself 12 ounces of Diet Pepsi on the days that I worked and when Andrew and I went out to dinner.  I ate absolutely no seafood and avoided deli meat at all costs.  I diligently tracked my pregnancy, as well as the baby’s development, and confirmed every new pregnancy symptom with countless websites.

This time around, I drank my regular 12 ounces of Diet Pepsi nearly every day for the first few weeks of pregnancy, right until I realized that the carbonation was making my morning sickness worse.  I still haven’t gone back, though I’ve consumed several raspberry and peach flavored iced teas over the past couple of weeks.  I’ve only read a handful of articles since becoming pregnant, and most of those have had to do with morning sickness, which has been considerably worse this time around.  I still scan my weekly emails, but I find myself forgetting what week I’m in from time to time.

Just two weeks after returning from our honeymoon, Andrew and I celebrated our baby with a date night at Cheesecake Factory.  We celebrated with family and friends in the weeks that followed.  We had date nights out nearly every month (we might have missed a month early on in my first trimester, when smells really bothered me), and we even went to Valentine’s Day dinner on my due date.  With this pregnancy, it was nearly a month before we could celebrate with a dinner date, and we’ll be lucky if we average one date night out per trimester this time around.  If our families are not in town, we need to hire a babysitter, and babysitters cost money, which would probably be better spent on John and his sibling.  We have a much better appreciation of how much diapers and formula cost this time around, after all.

Needless to say, this pregnancy has been very different from my first.  Most noticeably, I just haven’t had the time to just sit back and enjoy, or lie down and nap.  I have John to care for, and he keeps my days very busy.  Two and a half years ago, if I was tired, I took a nap.  Now taking a nap is much more complicated.  My life can’t just be put on hold because I’m pregnant.  Our day-to-day routine has not changed much, except that I begin every day with prenatal vitamins now.  I do not have time to notice how nauseous or tired I am, because I have a toddler to chase around, or work to do, or dinner to prepare.  But that’s not a bad thing, especially right now.

Last time around, my first trimester was rough.  I was tired and nauseous, and I had very little to distract me.  I had more than enough time to complete my work, and when all my tasks were checked off, I had nothing to keep my mind off my symptoms.  My first trimester seemed to take forever, and it wasn’t until I was a week or two into my second trimester that I really began to feel like myself again.  This time, the time has just flown by.  Every week, I marvel at how big our baby already is- he or she is the size of a avocado already!  Last time, it felt like it took forever before John was bigger than a blueberry because of how slowly the time dragged by, but it’s completely different with this new baby.  Now I just want things to slow down, especially as I enter into my favorite time of all: the second trimester.

One thought on “A Tale of Two Pregnancies: The First Trimester”