John will celebrate his second Christmas later this month.  It’s hard to believe that it’s already been a year since his last Christmas, or that he will be turning two this February.  I’m excited for Christmas this year in a way that I wasn’t last year.  Last year, John wasn’t even a year old yet.  He had no idea what was going on around him.  We plopped him on Santa’s lap and he beamed up at him, not because John loved Santa, but because he didn’t have much sense of stranger danger back then and the man with the awesome red suit (so soft!) had an impressive beard- great for touching and stroking.  John got a bunch of gifts last year, but he didn’t even realize that those gifts were for him, or why he was getting them.  He was also more interested in the boxes and tissue paper than he was in the gifts themselves (which might still be true this year).  On Christmas morning, there was no sense that Santa had come, that something miraculous had occurred while we lay sleeping.  On Christmas morning, John wasn’t even that interested in opening his gifts- he was more interested in getting his oatmeal at breakfast time and taking his nap when his regular nap time arrived.  If anything, opening gifts was an inconvenience to him, breaking into his otherwise very stable daily routine. 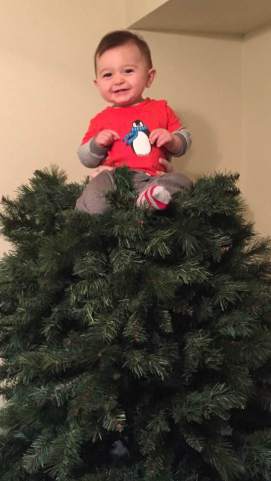 This year will be different.  Sure, he’s probably not old enough to really understand Santa, and there was no need to hide John’s gifts from him as I purchased them (he was more interested in the snack he was eating at the time than anything going on around him anyway).  He’ll probably be more interested in the boxes, but he’ll enjoy the gifts as well.  Santa has some substance now.  He can point out images of him, and he can usually identify him from a host of other Christmas figures like Frosty and Rudolf.  I will admit that John was terrified of Santa when he met him at the mall over Thanksgiving break, but the tears only started after John was settled on Santa’s lap and I had taken a step back from them (the little man was suffering from a touch of separation anxiety).

This year seems like more of a transitional year for us.  John is old enough in some ways, and still too young in others.  By next year, we’ll have to make some serious decisions- where will John sleep Christmas Eve?  Where will he wake up Christmas morning?  How many gifts will he get from Santa (because he will definitely believe in Santa Claus)?  How will we celebrate St. Nicholas Day?  Will we save a gift or two for the Epiphany?  So many family traditions to consider, to pass down to our children.  So many new memories to be made.

We have many decisions to make, but already, John is beginning to understand what this holiday is all about.  It is not about the presents, about the candy canes and chocolates, about the stocking stuffers and shoe stuffers (for those of you who celebrate St. Nicholas Day, like we did as children).  It is about joy and love.  It is about peace and hope.  It is about family and friends.  But most of all, it is about Jesus Christ.

John has learned something very important during these past few weeks.  Jesus is not just a man hanging from a cross, preparing to die or already dead, hanging on our wall.  He is not just a smiling face, arms reaching out for children from the pages of John’s children’s Bible.  He is not just a man who rose from the dead and abandoned his tomb.  He is the Word made flesh, God made man.  He is a tiny infant, swaddled and cradled in the arms of his mother.  Now, when we ask John where Jesus is, he will not only point to the crucifixes throughout our house or to the images found in his books, but he will also hold up the tiny baby Jesus from his plastic Peanuts Nativity, because on a very fundamental level, John knows that Jesus is all of these things- crucified Lord, lover of children, God made man, Word made flesh, and tiny infant lying in a manger- and so much more.  It is a lesson that all of us would be good to remember from time to time, especially as we run around purchasing last-minute gifts and baking last-minute Christmas cookies.