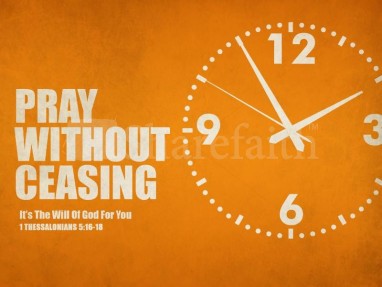 On countless occasions, I have been told that I must turn my entire life into a prayer, that I must offer up everything I do, no matter how mundane, for the glory of God.  When I left the convent, I struggled to adjust to not having set times for prayer and reflection every day.  Everyone’s answer?  Well if you don’t have time to sit in a chapel for forty-five minutes, make every action you do into a prayer.  Pray without ceasing, as St. Paul tells us.  I tried to take the advice, but I just couldn’t figure out how to practically incorporate it into my life.  Eventually, I settled into a new routine, one that included a holy hour daily between classes, and so for the time being, I didn’t need an answer.  I didn’t need to know how to make my every action into a prayer because I had plenty of time for prayer on a daily basis.

Then John was born.  Once again, I was posed with the question: What does it mean to offer my every action up as a prayer?  I didn’t have time for a holy hour anymore.  I barely had time to take a shower every day.  Life at home was hectic, unpredictable, and exhausting.  I lamented the loss of my quiet time, because now the only quiet time I had was when John occasionally decided to nap, and that time was designated for work.  Once again, priests and spiritual directors suggested that I make my daily actions a prayer, but when I asked how to do that, I never received a satisfactory answer.  Honestly, I rarely received an answer beyond “offering everything up,” which was ultimately just restating the question.

I actually got my first practical answer to the question back in college, before the concept of praying without ceasing was really a problem for me.  A very wise professor made the very practical suggestion that we sent an hourly timer on our watches as a reminder that we can offer every hour of our lives up to God.  When the alarm rang, we could offer up a short prayer before continuing on with our daily tasks.  I was immediately enamored by the idea, but my watch was not capable of accomplishing such a technologically-advanced task.  But at that point, my prayer life was flourishing under the guidance of a spiritual director, and I simply logged it in the back of my mind for future consideration.

A year and a half after John’s birth, I was still struggling with an unsatisfactory prayer life.  I was able to slip in prayer periodically throughout the day- a decade of the rosary on the way to church, daily Mass while John stood beside me organizing and re-organizing his prayer cards and missals, night prayer before going to bed at night.  I tried to journal regularly while I was at work, and I listened to Christian audio-books on my way home from work every day.  But still it didn’t feel like quite enough.

It was through divine providence that I came across the most practical solution to my dilemma.  As I was driving home from work one evening, I was listening to Matthew Kelly’s book “Resisting Happiness.”  It had been on my list of must-reads for a few months at that point, but with my busy schedule, it took me a while to work through books.  Matthew Kelly was addressing the problem of praying without ceasing, AKA offering up your every action to God, and providing very practical solutions.  The first was the watch idea, but my watch hadn’t been upgraded in the least since college (okay, that’s not entirely true- it no longer has Tinkerbell on its face).  The second focused on marking particular tasks, rather than marking the hours.  Every day that you’re at work, choose one person to pray for and then offer up every task for them.  Every time you cross off one task and move onto the next, say a prayer for that person and their intentions or needs.  I was instantly intrigued.

It was more hands-on than any other piece of advice I had ever heard, with the exception of the watch suggestion.  I had had people suggest the idea of offering up your tasks for specific people, but I had never been able to make the jump from the theoretical to the practical.  Matthew Kelly helped me to make that leap.  I was encouraged to choose a person at the beginning of the day and to write their name in my planner.  As I moved from one task to the next, diligently crossing out each task as it was accomplished, I offered up a short prayer for the person named for the day.  At the end of each day, I could have offered anywhere from three to fifteen prayers.  I felt fantastic, and I was being more productive than ever before.

I adopted the method immediately, choosing people at random or by their request.  Every day that I went to work, I would write a name in red ink at the top of the day’s tasks.  As I finished each task and started the next, I would pause for just a moment to offer up a silent prayer.  I liked the idea of offering up my work; it made my work feel so much more fruitful.  I felt good about the work that I was accomplishing, and as I considered my planner at the end of a long day in my office, it was undeniable that I had become infinitesimally more productive at my job.

I believe that there are multiple reasons why that would be.  For one, when you have the intentions of a friend riding on your work ethic, it becomes more important that you don’t procrastinate.  I was driven by a strong sense of justice.  If each person only had one day, I wanted to make sure that they got the best day possible.  And I recognized instantly that my new prayer routine was about quality, not quantity.  My day-to-day tasks differ greatly- sometimes I will have twenty emails on my list of things to do for the day; other times, I just have one or two tasks, like planning an entire Pre-Cana session.  Some work days are only five hours for me; others are nearly twelve.  As I worked and prayed, one thing became clear: it wasn’t about the number of tasks accomplished or the number of hours worked; it was about the dedication.  It was about the prayer.  If I persevered and fought against the urge to procrastinate, it was a prayer-filled, productive day to be proud of.

I also think I became more productive because the prayer is beneficial both for the person being prayed for and for the person praying.  It felt good to be praying for other people.  It was a beautiful motivation to work, and it made my work that much more rewarding.  This was pivotal for me.  Sure, there are some days where my work feels incredibly rewarding.  Retreats, lock-ins, conferences, even a particularly good Youth Night or Confirmation class.  But there are also plenty of days where I feel like I’ve done nothing but answer emails and edit lesson plans.  With my new method of prayer, even emails and lesson plans became redemptive.  Whereas once emails seemed to eat up hours of work, now each of those “wasted” hours has become fruitful.

So after years of searching, I have finally found a prayer form that really works with my hectic life.  I still have my regular prayer moments- car rosaries, daily Mass, regular journaling, and time before the Blessed Sacrament, but I finally have an appreciation for the idea of “praying without ceasing” or making my entire life a prayer.  With one simple, practical alteration to my day, my entire life has changed.  I recognize that there is always room for growth, but for the first time in a long time, I am actually proud of my prayer life at the moment.  And as a wife, mother, DRE, and youth minister, prayers that can transform the countless activities that I must accomplish on a daily basis into moments of communion with God are my perfect cup of tea.