This past weekend I had the chance to spend two days in prayer and reflection with several of my catechists and some members of our adult faith formation programs.  It’s rare that I am given such an opportunity.  Despite my position in the church, retreats are often spent leading sessions, coordinating small groups, and making sure that my teenage charges behave themselves.  These are not the most prayerful and restful ways to spend a retreat.

There was once a time when I could spend hours in prayer on a daily basis.  Obviously, when I was in formation with the Salesians, prayer time was built into our schedule.  We had time for meditation, the Liturgy of the Hours, Mass, spiritual reading, and the rosary every day, and once a week we were able to spend an hour in adoration before the Blessed Sacrament.  There was plenty of time for prayer between our classes, ministry, meals, and community time.  Sandwiched between our many daily tasks, we were allotted more than two hours for prayer every day.

Even while I was getting my degree, I found ample time for prayer.  My classmates and I attended Mass nearly every day that we were on campus.  Many of us even arrived half an hour early for additional prayer time.  I continued to pray the Liturgy of the Hours and to spend some time doing spiritual reading daily.  This routine didn’t change much after getting married, though certain elements needed to be rearranged to fit into my schedule as a full-time DRE and youth minister.  My prayer life has changed somewhat over the years, but mostly it has been the order of things that has changed.  It is only with the birth of John that my prayer life has seen its most drastic changes.

During those first weeks with John, I still found that I had a lot of time on my hands for prayer.  When your son wants to eat every two hours, what else are you going to do at 3AM?  I got into the habit of praying evening, night, and morning prayer during our nighttime feedings (I felt very much like St. John Bosco, who was said to pray his morning, evening, and night prayers in the wee hours of the night as well).  John slept a lot during the day as well, giving me time to do my regular spiritual reading and journaling.  There was no need to change anything…at least at first.

y the time John was five months old, he was sleeping through the night, eliminating my opportunities to pray the Liturgy of the Hours.  He was also only taking three 30-minute naps a day, leaving me less time for prayer.  His morning one was dedicated to showering, and I used most of his afternoon and early evening naps for work.  I suddenly found myself with very little time for prayer.

Eventually, I realized that my prayer life would need to change to better suit the life of a mother and DRE/youth minister.  I was no longer able to dedicate a solid hour to prayer during the day.  I was no longer able to show up in church thirty minutes before the start of Mass for some extra prayer time.  These lengthy prayer forms just didn’t fit into my life as a mother.  John demanded my attention when he was awake- he needed me to help him drink his bottles, eat his meals, clean up his messes.  And when he was asleep, I knew that I had an obligation to work.  My life was all about finding moments- moments to take a deep breath, moments to sit down and relax, moments to eat.  I would need to find moments for prayer as well.

As I sat with my catechists, all of whom are mothers themselves, they opened my eyes to what the prayer life of a mother often looks like.  As we learned last week, the first step to developing a deep prayer life is finding a time and place to pray.  For mothers, the places can range from shower stalls and toilets to the car.  As one mother commented, “I have one holy steering wheel.”  Times can range from the hour commute to work to the five minutes that it takes to use the restroom.  Mothers recounted stories of locking themselves in their bathrooms to pray, or else popping their fussy newborns in their stroller so that they can take a walk around the block and pray a decade or two of the rosary.  Their methods of prayer were creative, but also suggested something of the life of a mother.  Prayer hours are often spent on the move- pushing strollers or driving vehicles.  Prayer moments are stolen wherever they can be found- even if it means locking yourself in the bathroom for five minutes while your toddler is temporarily distracted by the new toy they found in the hallway (referred to as the toilet toy because it only came out when this particular mother went to the bathroom).  This is what prayer looks like when you’re a mother. 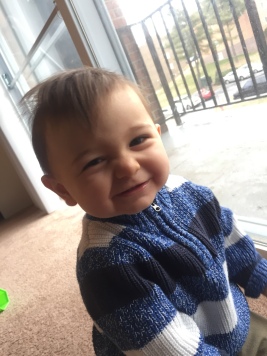 It might be easy to lament the loss of our former prayer lives, just as we might from time to time lament the loss of our former lives in general.  Motherhood changes us;  no mother would deny that.  But our prayer life is part of who we are, and that means that our prayer life must change as well.  We might feel like we pray less now, but most experienced mothers will agree that it’s not that we pray less- we pray differently.  The five minutes of prayer that we fight to get are just as valuable as the hour that we once spent in prayer prior to the birth of our children, just as the two pennies of the poor widow in Mark were just as valuable as the large donation of the more affluent worshiper.  Life is about offering all of what we have, even if it’s next to nothing.  God will happily accept our hard-earned five minutes, just as He happily accepts the many sacrifices that we make on a day-to-day basis as a mother.  The prayer life of a mother is unique, but it is also beautiful.   We just needed to be reminded of that from time to time.