When I first became pregnant with John, many mothers warned me of the dangers of putting my responsibilities as a mother before myself or my husband.  They told me how all-consuming the job of a mother can be, one that often seems to begin the moment you wake up (or more likely, the moment your baby wakes you up) and ends when your head hits the pillow (and during those first few months- or years- extends through the night as well).  I can go an entire day without seeing anyone but my son and husband (and sometimes that’s only for the hour that it takes to cook, eat, and clean up after dinner).  The cycle of eat, play, sleep can be monotonous, but it is also both time- and thought-consuming.  I have been known to go hours without eating, drinking, or going to the bathroom because I just didn’t have time to think about it.  It’s a reality that I’m sure most mothers understand.

We can go hours without thinking once of our own needs.  Hours can pass before we realize that we need to eat, drink, or just sit down for a minute.  We can easily ignore the demands of our own bodies for hours on end, if we are aware of them at all.  There were countless occasions during those first few months with John that in the quiet moments after John finally fell asleep, I suddenly became intensely aware of the fact that I needed to eat, drink, or pee.  It was almost as if my stomach and bladder were aware that my son’s needs were more demanding than my own, and they acted accordingly.

If it’s easy to ignore our own needs in favor of our child’s, it’s even easier to ignore our spouse’s.  Our bodies will eventually communicate to us what they need, and they can’t go more than a few hours without those needs being met.  Even those needs that are more dormant within us- the need for rest, sleep, and companionship, for instance- can only be held at bay for so long.  It doesn’t take much before we grow weary from a lack of these essentials.  Mothers who do not obey these fundamental needs quickly find themselves struggling against the beast that is postpartum depression.

I was regularly reminded to consider my own personal needs, and during those first few weeks that John was alive, people were constantly making sure that I was eating, sleeping, and seeing people other than my son.  As our newborns grow into infants and toddlers, it becomes easier to remember that our needs must be met from time to time, but the struggle to remember your spouse remains.

John has changed a great deal in the past ten and a half months.  As soon as you figured out one challenge, it was usually only a matter of days before the next one emerged.  First John didn’t sleep at night, but took four hour naps during the day.  Then he refused to drink his bottles, even though he was only consuming three ounces of formula at a time.  For a while, he wouldn’t fall asleep without massive amounts of rigorous rocking.  Then he went through a phase where he insisted on spitting out everything that we tried to put in his mouth.  For about a week, he couldn’t get his diaper changed without screaming bloody murder and trying to flip himself over.  Each month has presented its own challenges and difficulties, and in our efforts to find solutions, it’s easy to forget that my husband and I are in this together.

Honestly, sometimes it’s even easy to forget that we’re married.  When you dedicate so much of yourself to being someone’s mother or father, you can occasionally forget that in addition to being a mother or father, you’re generally also a husband or wife.  As we forge this new relationship with this tiny human being, we have to remember not to neglect the relationship that made that little life possible.  As difficult as it might be at times, mothers and fathers cannot neglect their relationship with their spouses.  To do so would be disastrous.

Andrew and I were warned of all of this prior to the birth of John, but it helps to be reminded from time to time.  Andrew and I work hard to preserve our weekly date night, even if that means rearranging our schedules and turning down other invitations.  Even though we don’t have extra money to burn, as is often the case with new parents, we can still have date nights at home.  From time to time, we can even go out for a proper date, thanks to the generosity of our friends and family.  Though it takes a bit of effort, especially when babysitters are involved, our date nights are completely worthwhile.  Marriages fail when spouses don’t put each other first; marriages are often incapable of withstanding the demands of parenthood when priorities are not in the proper order. 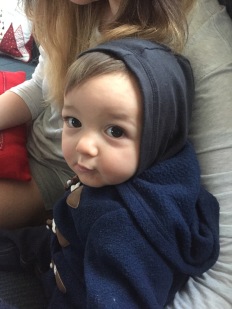 This past Christmas, Andrew and I prepared a very special Christmas gift for one another.  Rather than purchasing gifts for each other, we pooled the money that we normally would have spent on Christmas, birthday, and Valentine’s Day gifts and booked a mini-vacation for ourselves in Hershey, PA.  My parents graciously agreed to take care of John for two and a half days so that we could have that time to ourselves, and we were able to spend those days focused on each other and our relationship.  It was just the thing that was needed after a stressful semester and a demanding Christmas season at work.  It was just the thing that was needed to remind me that I am a wife first and mother second, a truth that makes me both a better wife and a better mother.