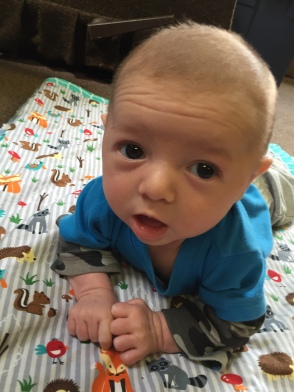 Last night, as I stood over the stove and stirred ravioli, I was struck by the normalcy of my actions.  Just eight weeks prior, it would have been completely normal.  Before John was born, I cooked most nights, while Andrew was charged with doing the dishes.  Normally, around 6PM or so, while I sat on the couch and Andrew sat at the table, I would look over at him and ask, “Are you hungry?”  Normally, he would nod his assent, and I would get up to cook.  Thirty minutes later, we’d be leaning over two platefuls of food, watching the next episode of “Arrow” or “The Flash” together.  Once both of our plates were empty, we’d snuggle on the couch for the remainder of the episode, and occasionally a second episode.  Eventually, Andrew would make his way to the kitchen to wash the dishes, and I would meander down the hall to the bathroom to brush my teeth before crashing on the couch for the next few hours.  Before John arrived, that was our normal.  Needless to say, eight weeks later, we’ve discovered a new normal.

But back to last night.  For the first time in weeks, I found myself cooking in relative peace.  Andrew was in the nursery with John, rocking him to sleep while I prepared an early dinner.  I was not on edge, wondering if JT would spend the next hour screaming as we passed him from one person to the next while we took turns shoveling food into our mouths.  I had finally found that coveted sweet spot, where I could find the time to both cook a meal and eat it- normally.  During the first few weeks of John’s life, that feat seemed impossible.  During the first few weeks, I was ready to go to sleep by 8PM, whether or not dinner had been prepared.  Between John’s constant evening fussiness and his need to eat every two hours after 5PM, there was very little time to prepare a meal.  I could barely manage to pop the meals that our friends had prepared for us in the oven or microwave.  As the meals dwindled and our refrigerator became emptier, I began to wonder how I’d ever be able to cook again.  I wondered if my life would ever feel normal again.

And then all of a sudden, I found myself standing by the stove, cooking ravioli.  Just like normal.  A new normal.  As I stirred the pasta, my mind wandered back over the past few weeks.  Just a week ago, I could barely get any work done between feeding sessions and fussy periods.  The first nap of the day was always reserved for a shower; the second was occasionally for work, but more often than not, offered the opportunity for me to eat a quick lunch.  Usually, his third nap of the day was spent in his car seat, as we went for a walk around the neighborhood.  I normally worked through his fourth nap, or else tried to wolf down the dinner that had been warming up in the oven for the past hour.  The fourth nap was always the worst.  It barely deserved the name ‘nap.’  It was a twenty minute warning before John’s fussy time began.  And then it was finally bedtime, first for John, and then for me. Oh, how I loved bedtime.  When it worked out.  Which wasn’t very often. 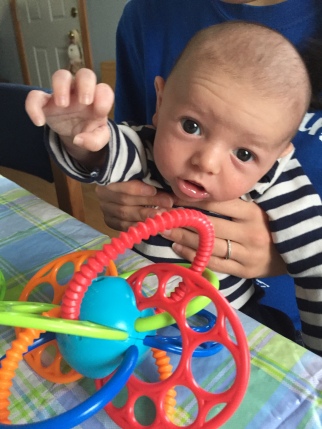 During the first few weeks, bedtime was always tough.  Usually he would sleep for about 45 minutes before he would wake up demanding food. I’d feed him and go back to sleep, only to be woken up an hour later. And so it continued until about 1AM, when he would eat for the final time before falling asleep until about 4AM. I never thought I could be so happy to get two hours of sleep.

But it’s been weeks since he last demanded to be fed every hour. Now when he goes to sleep, usually between 8 and 9PM, he’ll sleep until after midnight. Now we only have to wake up twice during the night to feed him, and usually he falls right back to sleep. We have made great strides in the past few weeks.

And with all that being said, the key to this new normal is that the most predictable thing about a growing baby is that they are incredibly unpredictable. It’s a lesson I once again learned last night, as Andrew and I took turns rocking John while my ravioli was left abandoned in its pot. Oh well…there’s always tomorrow. That’s my new normal.