With just one more week until Christmas, I’m counting down the final days in terms of work events.  There are just seven more days before Andrew and I begin our Christmas road trip, which translates into just three more events for me: the CCD Christmas party, Christmas caroling to the elderly and home-bound, and the Youth Group Christmas party.  In just the past week, I have planned and implemented a handful of other events: a Youth Group Christmas fundraiser (our first-ever), the Confirmation Christmas party, and a joint Youth Group-Confirmation service activity.  As each event comes to an end, I can tick off one activity standing between me and Christmas break.  As much as I love what I do, I’m counting down the days until I can see my family again.  As I’ve mentioned in the past, I’m a bit of a homebody, and living so far away from family can be a bit of a challenge for me.

This particular Advent season has been a bit more strenuous than others- and I’m not talking about my impending maternity leave (though that has also been causing me some stress, as I mentioned in my last post).  With an added group at the parish, that just means that there will be added Christmas events as well.  Another Christmas party.  Another Christmas service activity.  A Christmas fundraiser.  Even my regular Christmas events have been taken up a notch since I’ve been trying to encourage regular interaction between the Youth Group and this year’s Confirmation class.  I’ve gotten into the habit of eating while setting up, and I have developed a whole new appreciation for sit-down meals.  But despite all the stress of pre-Christmas preparations, I wouldn’t trade it for the world.

Normally, Christmas time is filled with parties at the parish.  Families bake enough Christmas cookies to feed an army.  Kids consume copious amounts of chocolate and Capri Suns, and wrapping paper seems to cover all surfaces.  We watch Christmas movies, play Christmas games, compete with Christmas trivia.  It’s a lot of fun, but it’s also exhausting.  And as much as the kids love it, Christmas parties don’t do much to teach them about the true meaning of Christmas.

Ultimately, Christmas is not about getting, or even giving, gifts.  It’s not about consuming ridiculous amounts of sugar and inducing sugar comas in little children.  It’s not about memorizing the names of all nine reindeer so that you can help your team win Christmas trivia.  And that’s why, even in the midst of Christmas cookies and trivia, I have tried to make all of my students aware of the true meaning of Christmas. 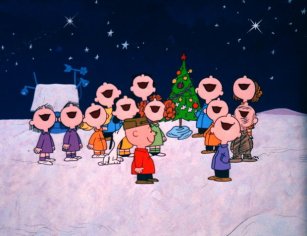 In addition to introducing my students to one of the best Christmas classics of all time, A Charlie Brown Christmas, I have also tried to instill in them a sense of generosity and concern for the less fortunate.  Many of my students will have had the opportunity to watch A Charlie Brown Christmas, possibly for the first time, before beginning their Christmas break.  It’s probably one of the most honest classics regarding Christmas, particularly here in America.  While Charlie Brown goes about town trying to figure out the true meaning of Christmas, his friends (if he can really call them his friends, considering how cruel they can be at times) try to convince him that Christmas is about gifts, Christmas trees, having a good time at holiday parties, and in Lucy’s case, attaining extra real estate.  In the end, it’s his friend Linus, immature and yet wise beyond his years, who teaches him the true meaning of Christmas as he recites the biblical account of the birth of Jesus Christ.

As the Scriptures remind us, Jesus was born into poverty, and the first men to worship him were also poverty-stricken themselves.  Christ was born in a stable, laid in a manger, wrapped in swaddling cloths that had probably seen better days.  When he was presented in the temple, his parents were required to give the poor-man’s offering: two turtledoves.  He was rejected again and again, judged for associating with sinners and eventually crucified as a rebel.  Our Savior was rejected by the world, forced to endure great hardships.  Though He was born a king, He was also born a tiny infant, the first-born son in a poverty-stricken family.  Christ is the true meaning of Christmas, and welcoming Christ the Lord and giving thanks for our Savior’s sacrifice is our true mission at this time of year.  And so I gave all of my students the ability to say ‘thank you’ this year.

In addition to our annual Christmas parties, our various programs have also had an opportunity to give to the poor this Christmas season.  Our littlest ones have had the opportunity to make Christmas cards for the less fortunate in our area.  Our Confirmation candidates and Youth Group members created Christmas stockings for those same families’ children.  In addition to serving the poor, our Youth Group has also found ways to help our own parishioners.  In addition to being born into poverty, our Lord was born into a family.  In our efforts to raise funds for our summer events, our Youth Group planned a Christmas party for the children of the parish, a three-hour event that enabled parents to get some Christmas shopping done.  While quite a few parents did go shopping for the afternoon, many more opted to use the three-hour window for other purposes, namely strengthening their marriages.

As parents dropped by the parish to pick up their children, many of them offered explanations for their activities during the party.  Some had gone back home, where their husbands were waiting with Christmas movies and glasses of wine.  Others only went home long enough to get all dolled up for an afternoon date with the hubby.  Whether parents opted for high heels or sweats, one thing was clear: as much as parents love their children, having kids definitely makes finding time for each other difficult.  And so even though many parents abandoned any pretense of going Christmas shopping during our fundraiser, I still consider it time well-spent.  Maybe next year we can have one at Valentine’s Day as well.  I’ll do anything to help our parents strengthen their marriages, which in turn strengthens families.

Christmas is not ultimately about gifts, games, or goodies.  It’s not about parties, holiday dresses, or finding the best Christmas tree.  It’s about giving to the less fortunate, and bringing the Christmas spirit to those who might struggle to find it.  It’s about spending time with family, and in our case, making sure that other people get the opportunity to spend time with their families as well.  It’s about giving of yourselves so that others might receive, whether you are giving your time, your talents, or your money.  Sometimes you have to spend in order to save.  Sometimes you have to give in order to receive.  Because in the end, Christmas is about love, generosity, and faith.  In the end, Christmas is about Jesus Christ, our God who was born a child, the King of kings who was born into poverty.  That’s the true meaning of Christmas.