No one would be surprised to learn that there are certain divisions within the pro-life movement.  You just need to attend a single March for Life to realize that many types of groups will be represented: Catholics, Protestants, Muslims, Jews, and even non-religious organizations can be found standing beside each other as they anticipate the beginning of the March.  While certain groups are more well-represented than others, the pro-life movement has never been a strictly Christian endeavor.  There are several other religions that also believe that life begins at conception and that all people, whether they are born or unborn, have dignity and deserve the right to live.  In addition, there are several secular institutions that propose that fetuses have rights too.  They might be an anomaly, but they certainly exist.  But these groups share a common cause, and they are willing to put aside their differences to fight for the right to life.

And yet within the pro-life movement, an incredibly dangerous group is gaining ground that threatens the future of the cause.  They often call themselves “former pro-life activists,” though this is a bit of a misnomer.  They remain pro-life, but you probably will not see them at the March for Life, which has become “too religious.”  They also refer to themselves as pro-life feminists, suggesting that they support the rights of unborn children as well as the rights of women.  What does their stance boil down to then?  Women should not have the right to murder their unborn children, but they should have the right to contracept as often as their hearts desire.  They should not be expected to limit themselves to sexual relations with one man, and they certainly should not be expected to remain abstinent until marriage.

In essence, these “former pro-life activists” propose that it is possible and even preferable to be anti-abortion and anti-chastity.  The pro-life movement should have nothing to say on matters of chastity.  Chastity and the abortion debate are not connected, and they should not be treated as though they are related to one another.  And this is precisely why these pro-life feminists call themselves former pro-life activists.  The pro-life movement has adopted a secondary cause that is unrelated.  It has taken a stance on a matter that it has no business promoting.  The vast numbers of pro-life religious organizations have pirated the pro-life cause and transformed it into something it inherently is not.  And this is why these pro-life feminists cannot identify themselves as publicly pro-life anymore.  Such an association has negative connotations in their eyes.  They do not want to be mistaken for religious fanatics who propose chastity, abstinence, and Natural Family Planning as the proper way to govern one’s sexual life.

This divide in the pro-life movement has the potential to destroy the cause from the inside out.  Though there have always been non-religious pro-life advocates, in the past they have generally put aside their differences on chastity in favor of their mutual fight for life.  These advocates were vocal as they fought for the right to life, but they were silent when it came to chastity.  They did not see a connection between the respect for life and chastity, but they were willing to overlook this difference because they knew that they shared a common goal with the religiously-based pro-life activists.  Now these pro-life feminists are not so quiet.  Now these differences have become grounds for causing a division that could jeopardize the entire pro-life movement if it is not properly addressed.

In the past, pro-life feminists have tolerated chastity talks during rallies because they did not believe that these beliefs inhibited the pro-life cause.  Now, former pro-life activists are convinced that pro-chastity activists have no business sharing their beliefs at pro-life rallies.  They suggest that the pro-life movement would be better off without their call for chastity and abstinence.  They assume that chastity does not help to promote the “culture of life” that is desired by all pro-life advocates, and that promoting chastity does not lead to reduced abortions.  And now their convictions have led them to retreat from the pro-life movement, or else to propose an alternative movement that does not value chastity and abstinence.  This is a movement that is doomed to fail, and it threatens to take the entire pro-life movement with it.

That’s a pretty big claim, but I think it’s justified.  Obviously, I am not trying to claim that you cannot be both pro-life and pro-“women’s health.”  If that were true, we would not have a problem.  The problem only arises because such people do exist.  These men and women, who go by the names of “former pro-life activist” or “pro-life feminist,” believe that you do not need to advocate chastity to fight for the right to life.  And their claim is technically true- as these people show through their very actions, one can be both pro-life and anti-chastity.  The question is not whether such a reality exists- it clearly does, but whether such a movement could ever hope to be victorious, and the answer is no.

First of all, a pro-life advocate who is also pro-contraception must acknowledge that their options are limited.  The day-after pill, as well as most oral contraceptives, double as an abortifacient.  What does that mean?  It means that if the pill, or the patch, or a whole host of other contraceptives, fail to prevent fertilization from occurring, these so-called “preventative medications” prevent implantation of the embryo in the uterus.  What does that mean?  When the pill fails to prevent conception from taking place, it will target and kill the developing child.  In other words, it leads to an abortion.  You might not know that you were ever pregnant, you might never see a doctor about your “problem,” but the result is the same: you have murdered the child that has already begun to grow in your womb.  I have a hard time understanding how a pro-life activist, former or not, can support such a deadly “medicine.”

But for the sake of our argument, let’s assume that such pro-life feminists do not condone the use of such forms of contraception.  Let’s assume that they only advocate the use of those forms of contraception that cannot double as an abortifacient- for instance, the condom.  When a condom fails, you run the risk of getting pregnant.  A condom has no “plan B” or fail-safe.  If it fails, it fails, and that’s the end of it.  Needless to say, a condom cannot kill the child that you have unknowingly conceived.  Let’s just assume that pro-life feminists only advocate for the use of these types of contraception, and not the more deadly ones.  What about them? 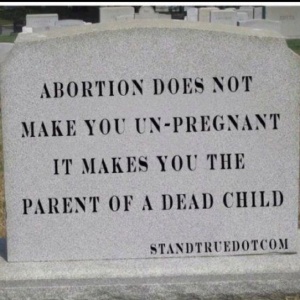 I believe that a pro-life movement that is not rooted in chastity is doomed to fail.  As you fight for the right to life, if you also fight for women’s reproductive rights, you are just creating more instances where an abortion might be chosen as a necessary consequence of these same women’s actions.  Which do you think would be more successful- teaching a woman to be chaste, thus enabling her to avoid a premature pregnancy altogether, or telling a woman who is already pregnant that she cannot abort her child because it deserves the right to life?  You might be able to save a handful of children by convincing their mothers to choose life, but you can save many more lives if you would just teach these women to live chastely before they become mothers.  If we taught young women the value of chastity, we would inevitably have fewer abortions.  If we taught young women to love their bodies and to respect the proper place of the sexual act, we would inevitably create a generation of women who do  not need to choose an abortion because they have already chosen to save themselves for marriage.  If we created such a generation, if we became such a generation, we could see an end to abortions in our country.  The pro-life movement could finally be successful.  But first we must teach them about the value of the human body, the value of human sexuality, the value of chastity and abstinence.  If we change the mindset of our country, we can change how our country makes choices about life and sexuality.  The pro-life movement will only be victorious if we change the way our country thinks.  Only then will we be able to change the way our country acts.

Don’t believe me?  Let’s just take a brief look at the AIDS epidemic in Africa.  In general, there have been two approaches to the situation: the Catholic approach and the secular approach.  The secular approach assumes that by giving Africans condoms and teaching them how to properly use them, we can bring the epidemic to an end.  The Catholic approach assumes that a deeper answer is required.  Giving Africans condoms is like putting a dirty band-aid on an infected cut: it will only make matters worse.  It will delay healing, and it probably will make the cut more painful.  We need to treat the wound, and then cover it with a clean bandage.  We need to choose a form of treatment that will lead to healing, not one that will simply cover up the infected area.  The Catholic Church proposes a form of treatment that might be more difficult to teach than using a condom correctly, but it is undeniably more successful in treating the problem: we must teach these people abstinence and chastity.  No matter your opinion, you must face the facts: countries that chose to teach chastity were more successful in eradicating the AIDS epidemic than those countries that chose to teach proper condom use.  Why?  Because chastity gets to the core of the problem.

The same is true of the pro-life movement.  Telling girls who are already pregnant the truth about the “clump of cells” that they are carrying is only a band-aid.  It might save the life of that unborn child, but it might not.  And I’m not saying that we shouldn’t engage in sidewalk counseling or pray in front of abortion clinic.  We need to do those things too.  But sidewalk counseling will not get to the core of the problem.  It is not enough to tell already pregnant girls that they shouldn’t abort; we should be able to reach these girls before they ever get pregnant.  We should tell them that they are worth waiting for, that they have been created to give themselves to another only in marriage.  We should tell them that this gift is meant to be accompanied by a solemn vow, a promise that you will love one another until death.

The pro-life movement should not be rooted in a fundamental ‘no:’ it should not begin with a ‘no’ to abortion.  It should be rooted in a fundamental ‘yes,’ a ‘yes’ to life and love, a ‘yes’ that respects our dignity and corresponds with the way God made us.  The “religious” pro-life movement generally gets this truth.  Some “non-religious” organizations within the movement get it too.  But the “former pro-life activists,” the “pro-life feminists,” do not, and their lack of understanding threatens the entire pro-life movement.  We cannot be afraid to speak about chastity and abstinence.  A pro-life movement that has no room for chastity will never be successful.  If we ever hope to win the fight for the right to life, we have to start at the beginning.  We have to start with chastity- because a woman who has already learned to love her body and respect God’s plan for her will know that she must love her child’s body and respect God’s plan for him or her as well
.  It’s as simple as that.