Last week, I participated in my first ever Vacation Bible School.  Sounds odd, right?  I’ve helped with programs very similar to VBS, but this was the first time I actually helped with a VBS program.  I’ve volunteered at a five-week camp that was loosely based off VBS, and I’ve helped with a two week-long Religious Education program that served as an alternative to traditional year-long Sunday School.  But up until last week, I had never participated in an actual VBS program.  And I wasn’t just participating in it; I was coordinating it.

Let me just tell you- it was overwhelming at times.  There are a lot of details that go into coordinating VBS.  You have to find adults to lead the different sessions and teens to help lead the groups.  You need to buy a whole host of supplies, items ranging from yellow frosting for sun cookies to shiny acrylic beads for decorating a cardstock butterfly’s wings (one of the daily themes was creation, so the snack and craft were both nature-themed).  You need to beg for donations, train volunteers, and hope and pray that after all your hard work, kids actually come.

I’ll be completely honest- in all my preparations for the program, it never occurred to me that no kids would come.  I advertised as usual, and I had been told that in years past, between 50-60 students had participated.  I knew that I had a few details working against me- after missing a summer when I transitioned into the parish, I knew that there would be some families who would have fallen off the bandwagon, and then there was an inconvenient schedule conflict that required me to push VBS back by a week so that it was no longer the week immediately after the Fourth of July, but the following week.  So yes, I was expecting less kids than usual- maybe 40 or so.

In the end, we had more volunteers than students, and at first I was afraid that the program would be a failure.  When 9AM came and went, I began to realize that our numbers would be much smaller than in years past.  But after a few quick changes, we were ready to go.  We might have had less than 20 students participate, but my staff was ready to make those 16 kids’ experiences wonderful.

Every morning, I had the pleasure of hearing about dinner conversations centered on the lessons from VBS from the day before.  Every afternoon, I had the pleasure of listening to campers gush about all the fun that they’d been having.  I couldn’t have been happier.  Not only were the kids having a good time in camp every morning, but I could tell that they were learning a lot.

Early on in the planning stages, I decided that I would teach the Bible Stories session.  In years past, many children had complained that it was the most boring part of VBS.  After securing a solid leader for Music- another weak point of the program in years past- I made the decision to forego the “floater” position typically assumed by the DRE so that I could teach Bible Stories.  As a DRE, I only taught the Confirmation class; during CCD I would visit classes to answer tricky questions or occasionally sub for an ill catechist, but I rarely had the chance to teach the little ones.   I was excited by the prospect that I would get to interact with every camper at VBS at least once a day for an extended amount of time.

The saddest moment of VBS was the final day, which was accompanied by the knowledge that the fun of teaching was nearly over for the summer.  Sure, I was thrilled that VBS was nearly done and had been largely a success (it had involved a lot of work, as well as really early wake-ups for the week).  But I was also sad that my short week of teaching was coming to an end. 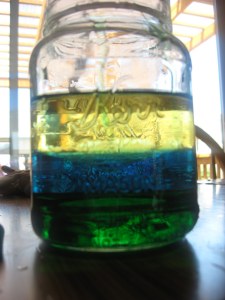 I enjoyed the nightly lesson planning, as I prepared for the next day’s classes.  I enjoyed seeing the campers run up to my little “classroom” with big smiles on their faces.  I enjoyed teaching my students about the effects of sin on our relationship with God, demonstrated with blue water (sin), clear baby oil (God), and green corn syrup (mankind).  Try mixing the three together some time- it’s a great way to teach children about what sin does to us.  Then add some bleach to the mixture to show the kids what Jesus’ death and resurrection did for us.

I enjoyed everything about my classes.  After two months of constant emails and monotonous office work, my week at VBS was the best reprieve that I could have asked for.  I’d nearly forgotten how rewarding it is to teach children about the faith, to watch their faces as they learn something new about the God that they love.  I’d nearly forgotten how much I enjoyed sharing my knowledge of the faith with my students.  I had nearly forgotten the magic of teaching.  Nearly.  That being said, I’m glad that I have about two months before classes start up again.