Happy Easter! I hope that you have all experienced a very fruitful Lent and a very joyful Easter Triduum. I have to admit- I can probably count on one hand the amount of times that I have attended all three services associated with the Easter Triduum: Holy Thursday, Good Friday, and the Easter Vigil. Most years, my mom and I attend the Thursday and Friday services, but I’ve rarely witnessed the Easter Vigil (which is quite possibly the most beautiful Mass celebrated throughout the entire liturgical year). For those who are not familiar with the Easter Triduum services, it begins with Holy Thursday’s Mass commemorating the Last Supper. Mass proceeds as usual, with one alteration: the washing of the feet. At every Mass, we hear the words of Christ at the Last Supper recounted to us and the bread and wine are transformed into the Body and Blood of Jesus Christ. As Christ instructed us at the Last Supper, “Do this in remembrance of me.” But the transubstantiation of the bread and wine, though always miraculous, is a regular occurrence at Mass. The washing of the feet is not.

In John’s Gospel, Christ washes the feet of His disciples during the Passover meal. As the story goes, Peter objects to this sign of servitude, but Christ declares that washing is necessary to receive Christ’s inheritance- eternal life. At this point in time, Christ also prays what is traditionally called His high priestly prayer and the apostles are ordained as the first priests of the Christian Church. 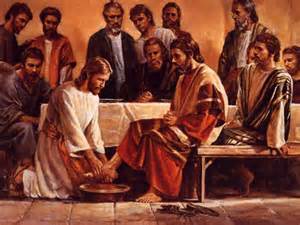 During the Holy Thursday liturgy, we are reminded of Christ’s actions, and His words to Peter.   The water reminds us of the new life that comes with Baptism, the culmination of this great Easter Triduum in many parishes. In some places, only men have their feet washed by the priest; this reminds us of the vocation to Holy Orders, to which only men were called by Christ. In other parishes, both men and women have their feet washed, and this reminds us that we are called to service.

After the washing of the feet, the Mass continues as usual. We receive communion and return to our seats. But this is where things change. The priest omits the final prayer and processes down the aisle in silence. There is a sense of incompleteness, of something left unfinished, and that is exactly how we are meant to feel.

There is no final prayer and song because the Mass is not over. We are never told to go in peace. Instead, the priest leaves the congregation in prayer after exposing the Blessed Sacrament. Once we have finished our prayer, we go home, leaving the church in silence like the priest.

Why does the Holy Thursday Mass end so strangely? Because the liturgy has not yet ended. Instead, it extends through Good Friday to Holy Saturday, concluding at the Easter Vigil. These three services are in fact one great liturgy, as I will demonstrate.

As I already said, there is no final prayer and song on Holy Thursday, and everyone leaves the church in silence. They enter the Church on Good Friday in the same way. Immediately, we perceive that something is different. The tabernacle door is open; Christ is not there. He will be hidden until the Easter Vigil, and we are instructed to remember His death and His time in the grave. For two days, Christ was in hell, saving the souls that had resided there. He suffered death and was buried. He descended into hell.

We are reminded of this when we look upon the empty tabernacle (the Eucharist actually remains in the Church, but is often kept in the sacristy until Saturday). The Good Friday service begins just as the Holy Thursday service ended: in silence. The priest walks up the aisle in silence, and after reverencing the altar, he picks up exactly where He left off. The congregation continues the Mass as if it had never been halted.

The Good Friday service is unlike anything else. After the readings, the congregation is invited to reverence a cross that is meant to represent the cross on which Christ died. The faithful are invited to show whatever sign of reverence they desire: genuflecting, kissing, touching. Once everyone has had an opportunity to approach the cross, the service continues. There is no Eucharistic prayer or consecration.

In the Catholic Church, Good Friday services usually occur at 3PM in the afternoon, recalling the hour in which Christ died. Following the symbolism of the empty tabernacle, there is no proper Liturgy of the Eucharist. No new hosts will be consecrated until the Easter Vigil (the priest consecrates enough hosts for two Masses during the Holy Thursday Mass). The congregation is invited to partake in the Eucharist, and once again there is no final prayer or song. The priest recesses in silence, and the faithful follow him.

The only Mass that is celebrated on Holy Saturday is the Easter Vigil, which takes place in the evening. This is quite possibly the most important moment in the Church year, and the most beautiful Mass you will ever see. The Mass begins in darkness and silence. A fire is lit, normally outside the church. The faithful light candles, using one another’s flames to light their own. The dark church is filled with the light of hundreds of candles, and the Mass begins.

The Liturgy of the Word is longer than usual. There are several readings, all of them focusing on the role of water in the world and in the Church. We begin with the story of creation, followed by the story of Moses, and eventually reach the New Testament account of Baptism. The series of readings concludes with a resurrection account, the first of the Easter season.

The Easter Vigil is the moment that children above the age of reason and adults are accepted into the Church. Those who have prepared all year are baptized and confirmed during the Mass, and they are invited to receive the Eucharist for the first time. It is a beautiful moment for the entire congregation, and especially for those most closely related to those being received into the Catholic Church. The Mass concludes with song, and we are sent out to proclaim the Good News: Jesus Christ is risen from the dead! Alleluia!