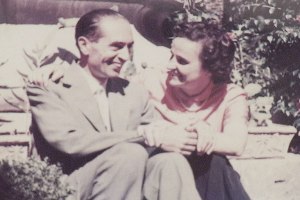 When I was in the convent, it was easy to find saints that I could use as models for my own life.  In addition to the slew of Salesian priests and religious that I studied, there were also hundreds of saints who were also priests and religious.  I had plenty to choose from, and I was able to model my daily life on what I read in their biographies.  I was able to study their prayer lives, shaping my own to look like theirs.  I had plenty of models to choose from, and their spiritual lives were just as diverse as their vocations.  Some were teachers.  Others were contemplative nuns.  Some spent hours in prayer before the Blessed Sacrament.  Others emphasized offering your work as prayer.  I was able to learn a great deal from all of them, and as I imitated them, I felt myself growing closer and closer to God.  But I also felt myself growing less and less satisfied with the religious life.  As my spiritual life was becoming stronger than ever, so was my desire for marriage and family life.  After months of discernment, I ended my time in formation, and began my life as a single woman called to marriage.

At first, my prayer life didn’t change very much.  I continued to attend daily Mass, pray the Liturgy of the Hours, and read my biographies of the saints, just as I had in formation.  Sure, I spent more time out with friends, and I wasn’t waking up at 5AM every morning, but in many ways my life was the same as it had been before.  I had a lot of free time, so I was able to dedicate it to prayer and spiritual reading.  I was still reading the biographies of consecrated religious and priests, and I found them very satisfying.  And then, several months later, they just weren’t enough.

When I decided to move down to DC, I knew that my life was going to hectic.  I knew that I would be juggling school, work, and planning a wedding.  Suddenly, I didn’t have time to commit to my various types of prayer, not if I wanted to sleep more than 6 hours or finish the readings for my New Testament class.  As my life because more active and less contemplative, I realized that my prayer life would need to transform as well, but I didn’t know how to make that happen.  So I began to look for biographies of married saints, and I realized that there really weren’t that many.  But then I stumbled upon a gold mind: the life of Gianna Beretta Molla.

I remember the first time that I learned about St. Gianna.  I was in high school, and she was introduced to us as “the pro-life saint.”  I remember that from that moment, I decided that I didn’t really like her.  It wasn’t because I couldn’t learn anything about her life.  I didn’t know anything about her life.  The only thing that we learned about St. Gianna was that she had died to give her child life.  Now, I’m pro-life, but that just wasn’t cutting it.  If that was the only thing worth saying about her, she wasn’t on my list of Top 10 Favorite Saints.  I could relate to the nun and priest saints more than I could relate to St. Gianna.  I was a teenager- dying to give my child life was the last thing on my mind.  At least the consecrated religious saints could teach me something about prayer.  It didn’t seem like there was anything I could learn from St. Gianna.

After that Theology class, I forgot about St. Gianna Beretta Molla.  Sure, I recognized her name, but she continued to be “the pro-life saint.” She slipped to the back of my mind as I dedicated hours to reading the biographies of other saints.  But when I decided that I really needed to learn more about married saints, her name was the first that came to mind.  She might not have made a great first impression, but I decided to give her a second chance.  Now I’m glad that I did.

Here are some basic facts about this saint.  As I already mentioned, she died as the result of her decision to refuse a medical procedure to treat her cancer that would have killed her child.  This was her fourth child, who survived because of her mother’s sacrifice.  She was heavily involved in the Catholic Workers movement in Italy.  And most importantly, she was a working mom.

There are very few married saints, and even fewer that actually died married.  And then there is the nearly non-existent class of working mother-saints.  As a young woman preparing for marriage and family life, and especially as a young woman who anticipated being a working mother, learning this detail about the life of St. Gianna was providential.  When you spend hours in classes where your professors talk about the damage done to children with two working parents, the fact that you will most likely be a working mother can be a bit frustrating.  Now don’t get me wrong, my professors understand that we live in a world (and in an area) where it’s difficult to live off of one income, but they are still very adamant that the ideal is to have the mother stay at home.  The fact that some mothers have to work is not a good thing; it’s akin to a consequence of sin.  That’s a bit disheartening to hear when you’re going to be a working mother yourself, and you actually really love your job.

And then I found St. Gianna Molla.  She was a working mother, yes, but she also chose to be a working mother.  She could have stayed at home with her children, but she actually chose to continue working.  St. Gianna was a doctor before she met her husband Pietro, and when they got engaged, one of the first matters that they discussed was her career.  She actually requested to continue working as a doctor once she and her husband began to have children.  Though it took some work on both of their parts- and the assistance of other family members- Pietro and Gianna made it possible for her to work even after having had three children.  When asked about this during an interview, Pietro explained the reasons behind this decision- Pietro fell in love with Gianna because of her dedication to and love for her patients.  It was something that Gianna was very passionate about, and he had always loved that about her.  When she asked him to consider the possibility of her working after bearing children, the answer was obvious: of course she would continue with her practice.

Gianna worked through the births of their first three children, and though it required some sacrifices, they made sure to never compromise on the raising of their children.  She continued to work, but only because her children were not negatively affected by her decision.  Her husband worked hours that enabled him to spend time with the children when she worked, and their families were also available to help when needed.  St. Gianna really was the quintessential “supermom”- she continued with her medical practice, remained involved with the Catholic Worker movement, and even educated her children.  In addition to that, she fostered a strong prayer life, attending daily Mass and praying regularly with her children and husband.  But then the couple learned that they were expecting again, and they knew that things would have to change.

Gianna and Pietro both agreed that Gianna would quit working upon the birth of this child, dedicating herself to the upbringing of their children.  Previously, neither spouse had felt that they were compromising with their children.  The little Mollas were dearly loved, and they were always surrounded by family.  But another child was going to tip the scale, and Gianna knew that her primary duty was to her children.  She sacrificed the career that she loved so that she could serve her children.  Some sacrifices are acceptable, but there are some things that should never be compromised.

Granted, Gianna never did quit working.  She died before she had the chance to become a proper stay-at-home mom.  She died just days after giving birth to her last child, also named Gianna.  But nevertheless, I think she’s the perfect role model for working mothers, whether they are such by choice or necessity. 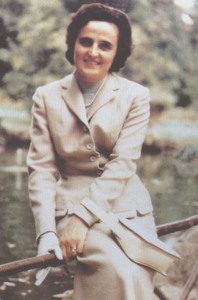 I think St. Gianna understood perfectly the delicate balance between parenthood and career.  There is nothing intrinsically wrong with a working mother.  It’s good that there are women that are so passionate about their jobs, and more particularly, about the people that they serve through those jobs.  Gianna wasn’t a working mother because she needed to be one, but because she wanted to be one.  But she also understood that she was a mother first.  It was fine for her to work as long as it didn’t negatively impact her children.  Yes, there is a fundamental difference between a mother and a father that cannot be overcome.  No, the roles of mother and father cannot be switched indifferently.  Mothers and fathers offer different things to their children; they teach them different lessons. Gianna understood that.

St. Gianna Molla was a mother before she was anything else.  She loved her job, and she loved working with her patients, but her love for her children came first.  When the sacrifice was needed, she gave up her career to raise her children.  St. Gianna Molla’s life affirms that it is permissible to be a working mother (from desire of from necessity), but we must always put our children first.  We must be willing to make sacrifices for the sake of our children.  This is a duty of parenthood, but it is also a gift.  St. Gianna Molla understood that, and we would be smart to follow her example.  I know that I will.