This past week, “Big Bang Theory” actress Kaley Cuoco made the bold claim she “was never that feminist girl,” a claim that she recanted just days later.  Was she forced?  It seems highly likely.  Was I suspicious?  Of course.  Cuoco spoke about how she enjoys when she can “feel like a housewife,” when she can “serve” her husband, and just days later, she got as close to denying her previous words shy of actually contradicting them.  I have to give her credit- though she copped out on an opportunity to tell the word that it’s okay to be a woman, she didn’t deny everything that she had originally said.  As far as I know, she still enjoys cooking for her husband.  Maybe she even gives him a massage every now and then.  Despite her decision to recant some of what she said, she still loves serving her husband.  As long as she stays quiet about what she does in the privacy of her own home, she can continue serving and not have to worry about the unfair pressures of the liberal media.  And the media can just keep on pretending that she’s just an actress.

Kaley Cuoco never suggested that she was forced to change her tune, but it seems likely that she was, shall we say, encouraged.  The liberal media pitched a fit, and she amended her statement to stay on the media’s good side.  Since I’m not worried about offending the media, I’ll go ahead and say what I think she’s been thinking all along: she never said anything wrong.

Is it a crime to want to serve your husband?  Is it illegal to enjoy feeling like a housewife every once in a while?  Not technically, though the media probably ranks anti-feminism right up there with war, discrimination, and murder.  You’d think it was illegal, considering how Kaley Cuoco was treated.  She was just honest, admitting her desire to love and serve her husband, and she got the torch for it.  Apparently you can’t support domesticity without being labelled as anti-feminist.

Yes, she admitted that she’s never considered herself a feminist, but she also acknowledged the struggles of women before her who fought for the equality that Cuoco and other women of today so often take for granted.  As she explained, “I was never that feminist girl demanding equality, but maybe that’s because I’ve never really faced inequality.”  Did she ever say that she was anti-feminist?  That she thought women were inferior to men?  Did she even suggest that all women are treated equally everywhere?  No, she just commented that she had never experienced inequality, so she never felt the need to be “that feminist girl.”

The media claimed that she didn’t give enough credit to the suffragettes and other women’s rights activitists, but I don’t think that this was the part of Cuoco’s interview that they were targeting.  I think they were more offended by Cuoco’s admittance that she enjoys serving her husband and feeling like a housewife.  The word “serve” probably made them all wrinkle their noses in disgust, and I can only imagine what they thought when she suggested that being a housewife might not be the worst thing ever.  Apparently all women need to be making as much money as men do, and they should never opt to stay at home with their children while their husbands work.  That would be counterproductive.  It would destroy everything that the suffragettes so diligently worked to gain.  It would be pushing back the clocks to a time that was barbaric in its treatment of women.  We all should be working 40 hours a week.  We all should be working 9 to 5 jobs, with occasional overtime.  And apparently, we should all hire cooks, cleaning services, and nannies too.  Unless equality for women means that we get to work 40 hours a week AND clean, cook, and take care of the kids.  I’m sure that’s exactly what women’s rights activists want.

That’s not equality.  That’s slavery.  If a woman can’t choose to stay home and care for her children, that’s inequality.  If a woman is berated because her job description is “stay-at-home mom,” that’s inequality.  Liberal feminists want to have everything with absolutely no sacrifice, but that’s not possible.  Like it or not, someone needs to take care of the kids, do the laundry, and cook, and mothers will always do a better job than nannies.  I’m sorry to all those nannies out there, but it’s the truth.  It’s better for children to be raised by their own parents than a stranger, and that’s the end of it.  In the liberal media’s quest for equality for women, someone does suffer, whether we admit it or not.  The children.  But I think women suffer at the hands of this quest too.

It’s not fair that anyone should be ashamed of their pleasure at serving her husband.  It’s not right than anyone should be mocked because she would prefer to cook, clean, and raise her children instead of working.  I know I’d rather stay home with my kids and not work.  That might not be possible for me, but I’d be lying if I didn’t admit that it was my dream.  I’d rather stay home than work.  In fact, I think lots of stay-at-home moms have it better than their working husbands.  I’m lucky to have a job that I love, but everyone is not as fortunate as I am.

If anyone thinks that the days of women’s rights are over, they should think again.  Yes, we fought for the right to vote, and we won.  We fought for equal pay, and for the most part, we won.  But in the process, in their desperate attempt to gain equal rights by any means possible, women’s rights activists stepped on many of their own.  I wouldn’t even be surprised if there were more women who enjoyed being a housewife than those who loathed it.  But we never heard from them.  The suffragettes smothered their voices, for fear that their enjoyment of their “mediocre” lives would be detrimental to the women’s rights cause.  To make the best case possible for supposed “equality,” they used inequality as a weapon on their own sex.  Does that seem hypocritical to you? 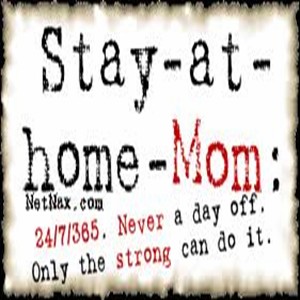 If Kaley Cuoco enjoys serving her husband, good for her.  Modern America could learn a thing or two from her.  There is nothing wrong with serving.  There is nothing wrong with being a housewife.  If you want to stay at home with your children, good for you.  If you would like to but can’t, I can sympathize, and one day I’ll probably know exactly what kind of pain you suffer.  I’m no model housewife- I can’t cook to save my life, I don’t especially enjoy cleaning, and I only like doing the laundry because I like the smell of the detergent and the feeling of freshly washed towels that are still warm from the dryer- but I still want to serve my husband for the rest of my life.  I just hope that my awful cooking doesn’t kill us first.