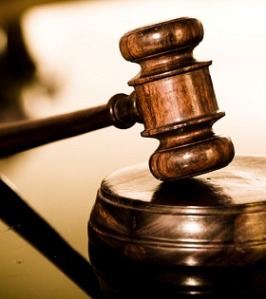 “Do not judge lest you be judged” (Matthew 7:1).  It’s probably one of the most quoted Scripture passages of today.  It’s been largely adopted by our liberal society as a way to chastise Christians who do not accept same-sex unions, transgenderism, and any number of issues that we don’t agree upon.  It’s a catch-all statement of condemnation, an ironic attempt by liberal supporters to use the Scriptures against us.  I hate to break it to you, but it’s not working.

Or at least it shouldn’t work.  You’re using it wrong.  You can’t use it as a carte blanche retort any time a Christian tells you that they don’t believe that same-sex marriage is possible or that it’s wrong to kill babies.  If you do, you’re over-looking some very important facts.

First of all, we will be judged.  We’re all going to die some day (no matter how hard we try to avoid it), and we’re going to be judged.  So really, it’s a moot point.  I’m going to be judged, so I should be allowed to pass judgements of my own.  It’s my prerogative as a human being.  But before you get all up in arms and condemn me, continue reading for some important qualifiers to my argument.

We all judge, and we will all be judged.  Ultimately, there is nothing inherently wrong with passing judgements.  We judge things all the time.  We judge murderers.  We judge rapists.  We judge the kid who steals a cookie from his classmate when she’s not looking.  No one complains when we judge those people- most of them are evil and deserve to go to hell after all (except the little thief- he probably just needs a time out).  That’s what you tell me.  When people commit grand evils, you scream for their punishment.  You judge them.  No, worse- you condemn them. 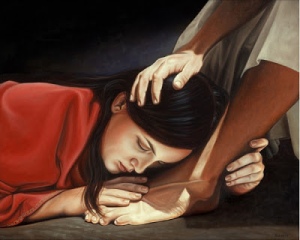 We’re all going to be judged.  And we all judge.  Granted, it’s not always good, but it’s not always wrong either.  Should we judge people?  No.  But can we judge their actions?  Of course we can.  Jesus did.  St. Paul says that we should too.

Jesus judged.  That’s right.  He didn’t say, Just do what you want.  It doesn’t matter.  Yes, man leaves his father and mother and clings to his wife, but if he would rather cling to another man, that’s okay too.  Who am I to judge?

No, that’s not what Jesus said.  Christ is always working to bring the truth to light, and sometimes the light blinds us.  We’ve walked around in the dark for too long.  But Jesus isn’t going to just leave us wandering through the shadows, groping our way towards salvation.  It would be much easier if He just took us by the hand and led us.  It would be easier if we were momentarily blinded by the light of Christ.  It might not be comfortable for a moment, but then we’ll be able to see again.  We’ll have found the light.

Salvation is not easy.  It is not a simple affirmation that makes all our actions meaningless.  St. Paul says that we are supposed to work out our salvation “with fear and trembling” (Philippians 2:12).  That doesn’t sound easy.  It might even be downright painful at times.

No one wants to admit that they’ve done something wrong.  No one wants to confront the fact that they’ve fallen.  No one wants to be condemned for their sins.  But that is what is done to sin.  It is condemned.  When Jesus saved the sinful woman from being stoned for her adultery, he told her to “sin no more” (John 8:11).  He didn’t condemn her, but he did tell her that her actions were sinful.  He did tell her that what she had done was wrong.  And he told her that she needed to reform her life.  He didn’t tell her that she could continue with her adulterous behavior as long as she professed that Jesus was Lord.  If she was to profess Christ as Lord, she needed to amend her life.  Jesus didn’t condemn her, but He did condemn her actions. 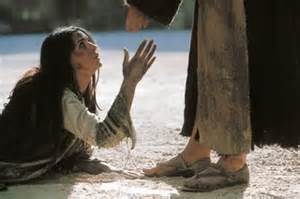 You can judge a person’s actions without condemning them.  You can name a sin for what it is without condemning the person who has committed that sin.  You can call a person’s actions immoral without hating them.  In fact, judgement can even be a sign of love.  We do not pass judgement on people for whom we have no feelings.  If we don’t especially care about a person, we won’t care what they do.  But if we love them, we do care.  If we love someone, we’re going to stop them from doing something that will harm them.  We will tell them to stop.  Not because we hate them, but because we love them.  Not because we want to condemn them, but because we know that they are capable of so much more.  When a loved one is falling short of their potential, we tell them to reach higher.  We tell them to stand up taller, to straighten their backs and lift up their heads.  We do not tell them that it’s okay if they want to continue to crawl in the mud.  To leave them to their own devises would not be a sign of love.  It would be a sign of indifference.  Or hate.  But certainly not love.  We would never want someone who we love to be groveling in the dirt when they could be soaring in the heavens.  It just doesn’t make sense.

Judgement can be a sign of love, if it is done out of charity.  No, we shouldn’t condemn people.  We should leave that up to God.  But we can call them out for their actions.  We can demand that they admit their sinfulness.  We can show them that they have wandered around blind, and that all they need to do is remove their blindfold to bask in the beautiful light of Christ.  We can do all these things, and if we love that person, we should.  We should recognize their sin for what it is, and we should help them to come to this realization as well.  And if they are reluctant to admit the truth, we should pray for them. 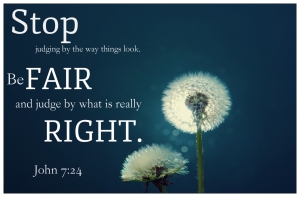 It is incredible how many people have used the “Do not judge” line on me.  It is incredible how many people followed up that statement with a condemnation of their own, and a judgement that is always much harsher than mine.  Christians have begun to be persecuted for their beliefs, and ironically, as they are mocked and condemned, they are almost always judged.  They are forced to endure the very thing of which they’ve been condemned, and by the same people who just told them that they shouldn’t judge.  Apparently there’s some qualification about who’s allowed to judge that must not be in my version of the Bible.  Because you are certainly declaring it as though it was the Gospel truth.

Yes, Jesus told us that we shouldn’t judge.  But He also told us to be like Him, and He was never afraid to name a sin for what it was.  Neither should we.  It might be difficult to love the sinner and hate the sin.  It might be nearly impossible.  But we must try.  Because if we know that someone we love is doing something that is destructive, it would be wrong not to stop them.  It would be wrong to let them continue in their immorality.  That is not love.  They deserve to at least know the truth.  What they do with that truth is up to them.  If they are given the truth and choose to reject it, that’s on them.  But if they are never given the truth and never abandon their sinful ways because you can’t “judge” people, that’s on you.  But I don’t think the judgement will be in your favor.