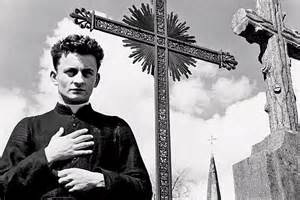 As part of my studies at the John Paul II Institute, I am required to take part in book forums three times a semester.  Normally, this means reading a 20th century work of Catholic literature (usually fiction, but occasionally poetry or drama), writing a short reflection paper on the book, and then participating in a group discussion.  Though this is only the second week of the semester, my class has already had our first book forum discussion, which was centered on Georges Bernanos’ Diary of a Country Priest.  Though I would highly encourage you to read the book yourselves, for those who don’t have the time or the desire to do so, here is a brief synopsis of the text (spoiler alert):

A young priest, who remains unnamed throughout the entire book, is assigned to his first parish, where his enthusiasm and idealism are met with dissatisfaction and downright rejection.  He is scorned by most of his parishioners, who view him as an ineffective priest with too much of an appreciation for wine.  He is repeatedly ridiculed and put down, and yet he remains faithful to his parishioners, never losing hope in them and always encouraging them to repent and seek the Kingdom of Heaven.  Because of his persistence and faithfulness, he does in fact bring about the conversions of some central characters, but his time at the parish is sadly cut short when he prematurely dies of stomach cancer.

The story itself is rather depressing, but the faith of the young priest is inspiring.  Rather than simply repeating everything that I already wrote in my reflection paper, I have simply provided the exact text below.  I dedicated my paper to an exploration of the relationship between the spirit of childhood, which is so clearly embodied by the young priest, and his fatherhood (as a priest who is meant to bring Christ to his parishioners.  While childhood and fatherhood seem like diametrically opposed characteristics, I made the case that these traits are actually intrinsically related, that the best father (or priest) is the one that maintains a spirit of childhood and thus is more closely united to God the Father, who “is younger than we” (G.K. Chesterton).

In the short time that he was resident pastor, the young priest of Ambricourt endured a great deal of hardships and suffering, and yet the priest, despite his early death, clung to hope and managed to rise above them. The Diary of a Country Priest reveals why he never lost hope, even when his thoughts seemed to be leading him in that direction. In his diary, the young priest detailed the long journey that led him beyond those moments of temptation and towards his entrance to eternal life with the Lord that he had so faithfully followed. Most notably, the diary suggests the power of hope over despair, and the spirit of childhood over the spirit of the world. In the first pages, the young priest of Ambricourt wrote, “I was never young because I never dared to be young” (235) and yet by the end of his life, even the priest realized that this was never true. While his impoverished childhood caused him to grow up quickly, he never really lost that childhood, but rather it was preserved with that spirit of poverty that he had embraced so young. By the end of his life, the young priest rediscovered the spirit of childhood he had thought he had lost, but truly, it had been there all along.

This spirit of childhood is most present in the sense of hope that permeates all of his actions, and most particularly, all of his interactions with his parishioners. From the beginning of his ministry at Ambricourt, the young priest is unwanted. The parishioners criticize him for his ascetic lifestyle and habit of drinking, which he has adopted because of his illness, and even his catechism class causes him much suffering. He is constantly giving of himself, visiting families and addressing the character flaws that he sees in the young people of the parish, and he is constantly rejected. In a very real way, even these mischievous children seem older than he. He retains the innocence of childhood, while the young people of the parish have already abandoned it in their quest for peer acceptance, as in the case of the young Seraphita, or in their desire to separate themselves from the parents that they loathe, as in the case of Mademoiselle Chantal. Yet, despite their harmful actions towards the priests, he continues to pray for their repentance and to treat them with kindness and respect. While they have given up their childhoods in exchange for their crooked desires, the young priest, out of childlike hope, does not give up on them. 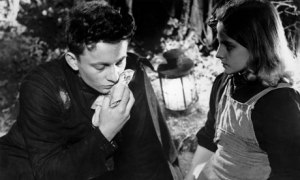 This spirit of childhood, and the pervading sense of hope that it entails, are the very characteristics that allow him to be a good priest and father, despite his parishioners’ skewed opinions. Most likely, their aversion is because of this spirit of childhood that he possesses and that they have lost. In him, they realize what they were given and rejected. Even at his lowest moments, when he has every reason to despair, the young priest never gives up hope. This virtue is so pervasive that every one of his parishioners is at least unconsciously aware of it. Those who are akin to him in their own sense of childhood, or who at least recognize the goodness of this spirit, are drawn to him, while he repulses those who are envious of him. Inevitably however, even the hardest souls soften before his childhood. By the time he dies, he has made amends with many of the most difficult of his parishioners, and he has even helped some to seek repentance for their sinful ways and to rediscover their own existence as children of God. Truly, his childhood makes him a better father. His hope and spirit of childhood make him transparent to his parishioners, and in him, they are truly able to encounter Christ. His faithfulness in the face of rejection is much like the everlasting love that God has for us. There seemed to be nothing that could prevent the young priest from loving his parishioners and continually holding onto the hope that they would one day meet Christ and find their own childhoods again. The young priest at Ambricourt manifests the fatherliness of God- His eternal love for His children, His hope for their future, and His repeated efforts to draw them back to Himself, but he also demonstrates how God is also like a child, never losing hope and constantly delighting in His creations, despite their many shortcomings. For in God, fatherhood and childhood both find their foundation. G.K. Chesterton best expresses this idea when he writes, “we have sinned and grown old, and our Father is younger than we,” and the priest at Ambricourt echoes this notion when he writes, “the opposite of a Christian people is a people grown sad and old” (18). He did not just write this, but he lived it out, drawing out from the hearts of the faithful of his parish their own sense of joy and childhood, helping them to become young again. Regardless of the age at which a person might die, whether they are young like the priest or older like Madame la Comtesse, we are all called to die young, in the spirit of childhood, clinging to the hope of heaven and the joy of eternal life with Christ.