Happy Easter everyone! While I might be a total Christmas junkie, there is definitely a special place in my heart for Easter as well. As much as I love the Christmas season (liturgical and secular), I have to admit that the Easter Triduum might be my all-time favorite time of year, liturgically-speaking.

This past week, I had the opportunity to sing in my parish choir, a pastime that I once cherished, but have been deprived of for the past few years. College and the convent made it rather difficult to attend choir rehearsals, even if I was present for the actual events. I absolutely love every liturgical celebration of the Easter Triduum, but the Good Friday service has always enamored me. I’ve often heard people complain that the music is “too depressing” and that the service itself is “too focused on death,” but I can only pity those who do not see the beauty of the cross and the Good Friday service.

I don’t consider the music to be overly depressing- hauntingly beautiful, certainly, but not depressing. The hymns remind us of the mercy of God, and the love that He has for us. Yes, that man condemned God to die on a cross is atrocious, but even this crime has been redeemed, transfigured. God has transformed it into something beautiful.

Yes, the Good Friday service is oriented around the death of Christ.  It would be absurd for it to focus on anything else.  Yes, this death occurred two thousand years ago, but it is just as relevant today as it was back then.  If it had not been for that one particular death, none of us would be able to gain eternal life.  We focus on this death, even if it occurred two thousand years ago, because if Christ had not died, we would never be able to truly live.  There would be no resurrection without the cross.  No empty tomb without a burial.  No life without death.

Good Friday celebrates the cross, because without the cross, there would have been no Easter and no resurrection.  As our parish gathered to venerate the cross of Christ, we all eagerly anticipated the coming celebration, Christ’s victory over sin and death.  But there cannot be a victory without first fighting a battle.

In Arlington National Cemetery, you can find soldiers standing guard over what is called the “Tomb of the Unknown Soldier” twenty-four hours a day, three hundred sixty-five (or sixty-six) days a year.  This tomb commemorates the lives of soldiers who died during the First and Second World Wars, the Korean War, and the Vietnam War.  These soldiers are unnamed, but each is honored for his sacrifice.  The Tomb of the Unknown Soldier is unique, but it is not the first of its kind.

Two thousand years ago, the original Tomb of the Unknown Soldier was created, and for three days, dedicated followers mourned the death of the most important unknown soldier to have ever lived: Jesus Christ.  He lived and died in an insignificant part of the world, the son of an insignificant carpenter and his wife.  Yes, He had followers, and he obviously caused quite a stir since He had to be condemned to death, but for all of His popularity, upon His death, He remained relatively unknown.  There is not a single reference to Jesus of Nazareth in any pagan work, and only one Jewish historian, Flavius Josephus, felt the need to give Jesus of Nazareth a line in his book Antiquities of the Jews.  While Jesus was condemned according to Jewish law, He died as thousands of men in the Roman Empire did- on a cross.  Even after He rose from the dead, Jesus Christ did not appear to great multitudes of people; instead He chose to reveal Himself only to those who already believed in Him.  In the grand scheme of things, Jesus Christ seemed to have died an unknown soldier, cast off as a blasphemous Jew or else a failed revolutionary. 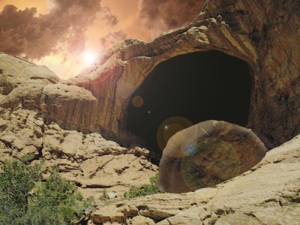 For three days, only Christ’s most devout followers stood guard over his tomb.  Like the unnamed men buried in Arlington National Cemetery, many people mourned the death of this unknown soldier.  He had fought the good fight, but to His despairing disciples, He seemed to have failed in His mission.  They had wanted a Messiah, a King.  They had expected Him to overthrow governments and unseat corrupt rulers.  Instead, they had gotten a carpenter’s son who had been condemned to die on a cross.  He had come and promised life, but then He died.

But then the unimaginable happened.  After three days in the tomb, the unknown soldier rose from the dead.  He had been dead, but He was alive again.  In order to defeat sin, He who knew no sin was “made to…be sin” (2 Corinthians 5:21).  In order to conquer death, the Bread of Life had to die.  The battle was only won after it seemed as though all had been lost.  Christ emerged victorious only after it seemed as though He had sacrificed His life for nothing.

Christ was the primordial unknown soldier.  His battle was against sin and death, and His battlefield was the cross.  He fought against the powers of sin and death, and He won.  Christ’s death gave way to His resurrection.  The cross yielded to the empty tomb.  Good Friday prepared us for Easter Sunday.

For three days, Christ’s most devoted followers mourned His death and guarded His tomb.  Though reason told them that the battle had been lost and death had been victorious, they continued to hope.  They did not lose faith.  And so they became the first witnesses to the resurrection, the first people to encounter the Risen Christ.  They were the first to learn that the battle against sin and death had been won.  Christ had emerged from the tomb victorious.

Jesus Christ “emptied himself, taking the form of a slave, coming in human likeness; and found human in appearance, he humbled himself, becoming obedient to death, even death on a cross.  Because of this, God greatly exalted him and bestowed on him the name that is above every name, that at the name of Jesus every knee should bend, of those in heaven and on earth and under the earth, and every tongue confess that Jesus Christ is Lord, to the glory of God the Father” (Philippians 2:7-11).  Satan was prideful, and believed that he would be victorious.  Christ, the unknown soldier, had died on a cross and been buried in a tomb.  It seemed as though the battle had been lost, that Christ had failed, but Christ’s humility, His willingness to be obedient to death, even death on a cross, sealed death’s fate.  Christ died so that He could rise.  He became like sin so that through His death, sin would be defeated.  Death gave way to life.  The cross was transformed; the tomb was transformed.  Things associated with death became symbols of life, and not just earthly life, but life eternal.  And finally, through His cross and resurrection, the unknown soldier Himself was transformed.  He died relatively unknown, but He was raised having been given the name that is above all names.  And so today, two thousand years later, at the name of Jesus, heads continue to bow and knees continue to bend across the globe.  For this is Jesus Christ, the King of the Jews and the Son of God, and He has risen from the grave, victorious.  Alleluia!  Alleluia!