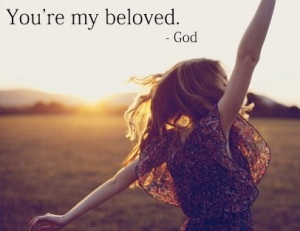 “I am His Beloved, and He is mine” (Song of Songs 6:3).  It’s quite possibly my favorite passage in all of Scripture.  There is just something about being called ‘Beloved’ that speaks to the heart, especially to that of a woman.  We long to be loved, to be called the Beloved, and in a way, to be possessed.  I know that seems an odd thing to say, but I still think it’s true.  And that goes for all people.  Insofar as we want to be loved, we want to be possessed.  But I’m not talking about the kind of possession associated with objectification and the degradation of the human being.  I’m talking about a very different form of possession, one that is associated with being a gift.  I once heard a professor say that no matter how much we might want to argue that we do not innately desired to be possessed, our language and very being speaks differently.  When we fall in love, we say things such as, “I give my heart to you,”  and “I want to be yours forever.”  We speak a language of possession when we speak the language of love.  But like I said earlier, it’s not a degrading possession.  It is a possession that frees, insofar as it binds us to another human being.  It is a possession that is given, insofar as it is expected to be taken, or expressed another way, received.  When we speak of being one’s Beloved, that is what we talking about.  But what does it mean to be the Beloved of God Himself?  And how do we more fully become that Beloved, become ourselves?

I just finished reading a book called “Life of the Beloved” by Henri Nouwen.  When asked by his secular, atheist-Jewish friend to write a book “about the spiritual life for me and my friends” (16), “about the deepest yearnings of our hearts, about our many wishes, about hope…about love…about…God” (18), Nouwen did not think that he was capable of such an endeavor.  But he tried anyway, and “Life of the Beloved,” came about as the fruit of his labors.

In Nouwen’s mind, despite the many things that separated his friend and him, there was at least one thing that they shared- the need to be loved, to be the Beloved.  This desire is what gives meaning to life; it’s the driving force behind so many of our actions.  And so Nouwen strove to construe a spirituality centered on this idea, a spirituality that could be embraced by both a devout Catholic priest such as Nouwen and a secular Jew like his friend.  In the end, Nouwen’s friend had to admit that Nouwen’s book had not spoken to him as he had hoped.  As Nouwen’s friend sadly related to the priest, he and his friends were too far gone to even conceive of the possibility that we should all be the Beloved of God.  Despite the beauty and eloquence of the spirituality proposed by Nouwen, it just couldn’t speak to the secular heart in a language that it could understand.  The world, unfortunately, has lost sight of the fact that man was created for love, and if it can’t understand that, it cannot conceive of what it means to be the Beloved.

Despite the fact that Nouwen ultimately failed in his endeavor to produce a book that spoke to the heart of the secular man, “Life of the Beloved” still has a lot to teach us.  I’ve posted some of my favorite quotes below, with some of my own commentary and reflection interspersed throughout.  I highly encourage people to read this book (it’s rather short), but if you don’t have time to do that, I hope that some of these select pieces might speak to your heart as it did to mine.

“I can only look for something that I have, to some degree, already found.  How can I search for beauty and truth unless that beauty and truth are already known to me in the depths of my heart?  It seems that all of us human beings have deep inner memories of the paradise that we have lost” (38).  Man longs to know God because he has already met Him.  He longs to love and be loved because God loved him first.  Faith, and man’s search for God, is not new, but rather is the remembering of something that has existed from the beginning.

“Becoming the Beloved means letting the truth of our Belovedness become enfleshed in everything we think, say or do” (39).

“When our deepest truth is that we are the Beloved and when our greatest joy and peace come from fully claiming that truth, it follows that this has to become visible and tangible in ways that we eat and drink, talk and love, play and work” (40).  Our existence as the Beloved of God has to be infused in every aspect of our life.  No thought, word, or action should ever be separated from this fact.  To act as though this were not the truth of the matter would be akin to pretending that we did not need to eat and drink, talk and love, play and work, in order to live.  Man was created to be loved, and that reaches down to the core of his existence and colors everything about him.  How often do you allow the love by which you were created shine forth from your heart?  When you eat dinner with your family, does that reveal to them that you are the Beloved of the Lord?  That they are?  What about when you talk to your friends, or better yet, your enemies?  When you disagree with a co-worker?  When you go to the park, or the bowling alley, or the skating rink?  Do you show the world God’s love through your daily life?

“The world is only evil when you become its slave.  The world has a lot to offer- just as Egypt did for the children of Jacob- as long as you don’t feel bound to obey it.  The great struggle facing you is not to leave the world, to reject your ambitions and aspirations or to despise money, prestige or success, but to…live in the world as someone who does not belong to it…All the good things our world has to offer are yours to enjoy.  But you can enjoy them truly only when you can acknowledge them as affirmations of the truth that you are the Beloved of God.  The truth will set you free to receive the beauty of nature and culture in gratitude, as a sign of your Belovedness.  That truth will allow you to receive the gifts you receive from your society and celebrate life.  But that truth will also allow you to let go of what distracts you, confuses you and puts in jeopardy the life of the Spirit within you” (104-105).

“The unfathomable mystery of God is that God is a Lover who wants to be loved.  The one who created us is waiting for our response to the love that gave us our being.  God not only says: ‘You are my Beloved.”  God also asks: “Do you love me?” and offers us countless chances to say ‘Yes” (106).  Do you love Him?  Can you say ‘yes’ as Mary did?

“With the disappearance of the sacred in our world, the human imagination has been impoverished and…many people live with a sense of loss, even emptiness” (116).  This is ultimately why Nouwen could be said to have failed at his original task.  He was asked to write a spiritual book for secular people who simply had very little spirit…or at least didn’t believe that there could be such a thing as spirit.  We live in a world that has lost hope, and the human imagination has indeed become impoverished.  We can no longer imagine a God that loves us; we can no longer comprehend how anyone can love us.  We have lost sight of the fact that we are God’s chosen ones, His Beloved children.  We have become deaf to His voice after having spent too long listening to the echoing cries of a society that asserts that we are worthless as we are, but only become worthy of love according to what we can do.  We no longer know who we are, and thus we can no longer recognize in ourselves the face of the Beloved.  God longs to reveal Himself to us, but the world has made us blind.  Even though Henri Nouwen’s book might not have served its original purpose, “Life of the Beloved” was not a failure.  It reveals a truth that is meant to speak to our hearts, but unfortunately, many people today have lost the ability to understand the language of love.  If we are to remind the world of its existence as God’s beloved children, we must help them to learn the language.  As Nouwen suggested at the beginning of his book, the person of today is looking for love.  He is looking for something that he has already to some extent found.  The truth of his Belovedness already lies in the deep recesses of his heart, and we who already know that we are loved by God are called to reveal that love to our fellow man.  Love calls forth love.  If we acknowledge our own existence as God’s chosen ones and call it forth from the hearts of others, their hearts will slowly awaken, and the truth will most certainly set them free.  Are you ready to be the voice of God here on earth, calling slumbering hearts to awaken in the light of the love of God?